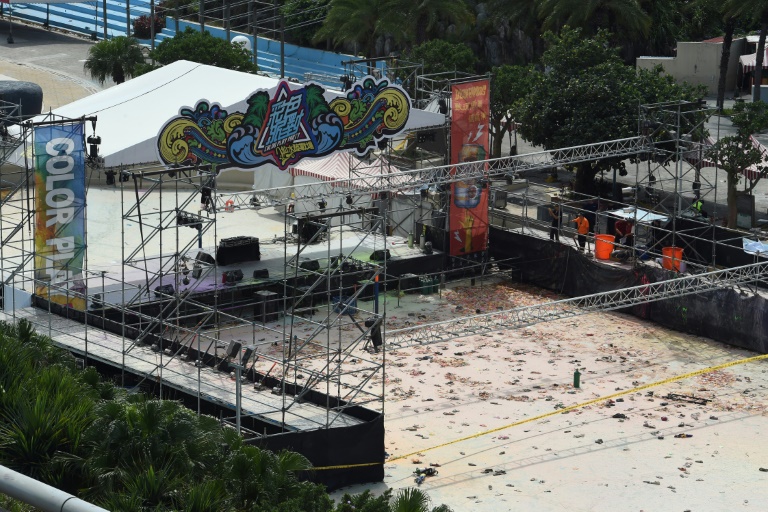 A 20-year-old partygoer died Monday after suffering 90 percent burns from a fireball that injured nearly 500 people at a Taiwan “colour party”, with organisers facing charges after plumes of decorative powder ignited.

She is the first fatality from the disaster, which saw crowds of young revellers engulfed in flames after being sprayed with clouds of multi-coloured corn starch.

The company which produced the starch said users had been warned of a potential fire hazard.

Around 1,000 spectators had attended the Color Play Asia event at the Formosa Fun Coast water park, just outside the capital Taipei, on Saturday evening.

More than 200 suffered serious injuries and are being treated across 43 hospitals.

“Doctors pronounced Lee dead after her mother agreed to stop the treatment provided to her daughter,” an official at the Taichung city government’s health bureau told AFP.

The official confirmed that Lee had sustained 90 percent burns.

Media reported that Lee’s 12-year-old brother was also hospitalised with 80 percent burns. Both were standing close to the stage when the fireball erupted, reports said.

Three suspects were released on bail late Sunday as prosecutors investigate them on charges of offences against public safety and negligence causing severe injuries.

They could face three years in prison for those charges, but that could be raised to five years now that a victim has died.

The suspects include owner of Color Play Asia Lu Chung-chi, 41, who knelt in apology as he was bailed late Sunday.

Two others were released without bail, but are currently barred from leaving Taiwan.

While it has yet to emerge exactly how the blast was triggered, authorities have speculated that heat from the stage lighting or cigarettes could have ignited the corn starch.

When asked by reporters why people had been allowed to smoke at the event, Color Play Asia’s Lu said: “There were too many people smoking at the scene, there was just no way to stop it.”

General manager of the water park Chen Hui-ying said the venue had “never heard such an activity could be dangerous”.

But the company that supplied the corn starch to Color Play Asia warned of its flammability.

The company said the colour powder was “flammable under high temperatures, especially when its density is high”.

It added that warnings were printed on the bags of corn starch asking users to wear goggles, warning of flammability and banning its use in an closed space.

“We feel hurt for the young people. We’ve stopped selling and producing such powder in line with the government ban,” Chou Hui-fang, vice president of the company, told AFP.