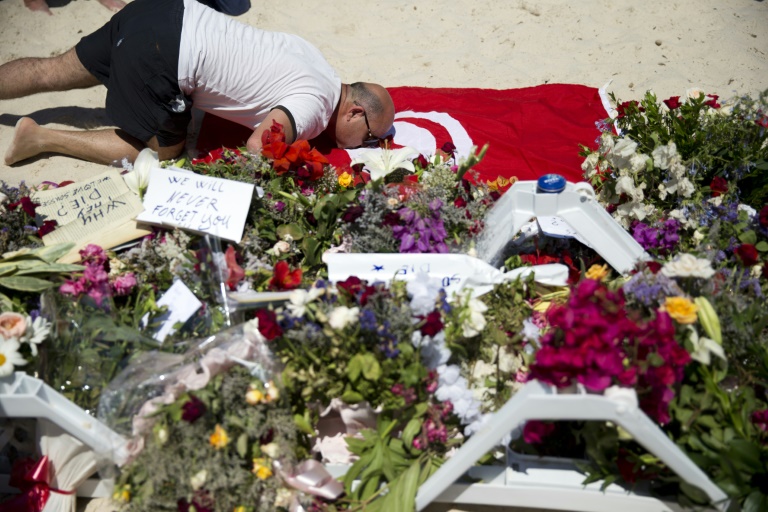 Tunisia said it would arm tourism police and deploy hundreds of reinforcements as authorities moved to boost security after a jihadist gunned down 38 people at a seaside resort in an attack claimed by the Islamic State group.

Police on horseback and quad bikes patrolled the beach at Port El Kantaoui north of Sousse, where the worst jihadist attack in Tunisia’s history took place on Friday.

On Monday, interior ministers from Britain — the country hardest hit — France and Germany will visit the seaside Riu Imperial Marhaba Hotel south of Tunis, where the killings took place.

The brutal attack by a lone gunman saw at least 15 Britons and one German among those killed, and dealt a heavy blow to the vital tourism industry.

Tourists gathered around bouquets of flowers laid in the sand, one asking simply: “Why (did) they die?”

UK Prime Minister David Cameron called for a fightback against extremism in response to the mass shooting, as the BBC reported the number of British victims may rise to more than 30.

In Tunis, leaders of the North African country scrambled to find ways to bolster security.

The tourism ministry confirmed plans to deploy 1,000 armed officers from July 1 to reinforce the tourism police, who will now also carry guns for the first time.

Armed officers will be deployed “inside and outside hotels”, on beaches and at tourist and archaeological sites, the ministry said.

Friday’s attack saw a Tunisian student disguised as a tourist pull out a Kalashnikov assault rifle hidden inside a beach umbrella and open fire on holidaymakers at the seaside hotel.

Malek, 16, said he saw the gunman unleash the killing spree.

“I saw the guy put his parasol down in the sand, squatting just like anyone would to set it up. But suddenly he grabbed a Kalashnikov,” he said.

“Everyone stood up to see what was happening, and then we saw him shoot at the tourists, with a big smile on his face.”

The police arrived “seven to eight minutes” after the shooting began, Aroui told AFP, adding that he is awaiting the results of an inquiry.

“One person alone committed the attack but others helped him for sure,” said Aroui, announcing that the attacker’s mobile phone had been found.

The gunman’s family has been interrogated by police.

Ireland said on Sunday three of its citizens were killed, and the dead also include a Belgian and a Portuguese.

As the painful efforts to identify the dead continued, several British policemen arrived Sunday at the morgue of the Charles Nicolle hospital in Tunis where the bodies of the victims were kept.

The Foreign Office urged its citizens still in Tunisia to be vigilant, saying there was a risk of further incidents, as Britain mourned the worst loss of life in such an attack since the 2005 London bombings.

Writing in British newspaper the Daily Telegraph, PM Cameron wrote: “We must be stronger at standing up for our values â€“- of peace, democracy, tolerance, freedom”.

He called for efforts against online propaganda by groups like Islamic State (IS).

“We must be more intolerant of intolerance â€“- rejecting anyone whose views condone the Islamist extremist narrative and create the conditions for it to flourish.”

IS marks on Monday the first anniversary of its self-declared “caliphate” in parts Syria and Iraq.

The extremist group has since launched attacks around the world, including one three months ago on the Bardo National Museum in Tunis that killed 21 tourists and a policeman.

Of the 38 killed, Tunisia has identified 20 of the victims’ nationalities so far, including at least 15 Britons.

“We are taking the time we need. There must be zero errors. We have taken the dental and palm prints. Families have arrived from abroad to identify the bodies,” said Naoufel Somrani, head of the health ministry’s emergency services.

But the industry — which accounts for seven percent of GDP and almost 400,000 jobs — has been reeling since the 2011 revolution that ousted dictator Zine El Abidine Ben Ali was followed by a rise in jihadist violence.

Hundreds of shocked tourists have been leaving for home since Friday’s attack, but some holidaymakers said they had chosen to stay.

“It was nobody’s fault. We are scared… But this kind of thing can happen anywhere,” French tourist Safia told AFP as she walked along the beach in the resort area.

In the past four years, dozens of police and soldiers have been killed in Tunisia in clashes and ambushes attributed to jihadists — mainly in the western Chaambi Mountains.

Disillusionment and social exclusion have fuelled radicalism among young Tunisians, with the country exporting some 3,000 jihadist fighters to Iraq, Syria and neighbouring Libya.