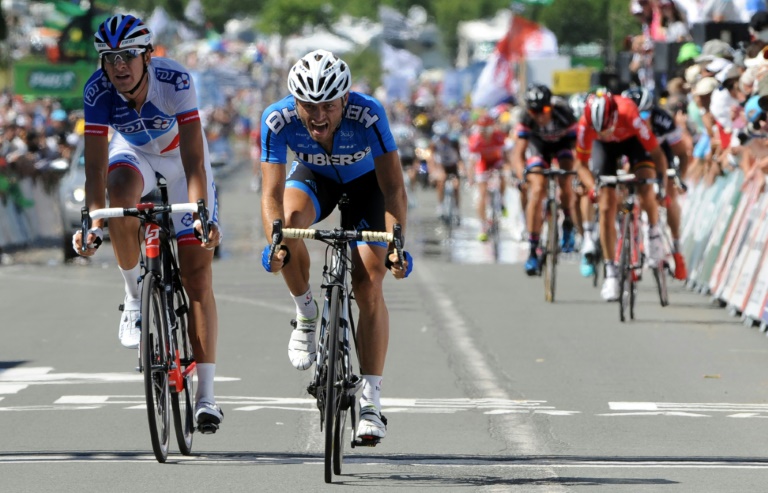 Tronet has never raced for a World Tour team nor taken part in the Tour de France but he stunned more illustrious opposition to snatch a dramatic victory after 247.4km around the Vendee region.

“For the last month I’ve been telling myself it’s possible, I did everything to win, I really believed in it,” said the 28-year-old Tronet, a professional on second tier Continental Tour teams since 2007.

“This is my reward, I’ve been struggling for nine years.”

In-form Bouhanni was widely expected to win the race and was ideally placed in the run-in to claim the French title three years after his first national success.

But a wave caused by Anthony Roux, who was later stripped of his second-placed finish as punishment, took Bouhanni down.

The Cofidis rider was quickly back on his feet and seemed to be fine but he later took to Twitter to say he would miss the Tour de France.

“Certainly out of the Tour. Rib cracked or broken… I’ll update soon,” said the 24-year-old.

“No words to describe my sadness and disappointment.”

Tony Gallopin was promoted to second with Sylvain Chavanel third ahead of a trio of riders who will be expected to challenge for stage wins at next month’s Tour — Warren Barguil, Julian Alaphilippe and the charismatic Thomas Voeckler.

The 35-year-old, who was national timetrial champion last year, beat Carlos Barbero and Jesus Herrada in a sprint finish at the end of the 189km race.

Paris-Roubaix winner from 2014 Niki Terpstra won the Dutch title for the third time at the end of a 253km course with Ramon Sinkeldam second and Danny van Poppel third.

But there was no such luck for another one-day specialist, as Belgium’s Greg Van Avermaet was beaten into third in his national championships where Preben Van Hecke won the 252km race ahead of Jurgen Roelandts.

Edvald Boasson Hagen did a road race and timetrial double in Norway while Bob Jungels took the Luxembourg title.

Tomasz Marczynski is the new Polish champion while Petr Vakoc won in the Czech Republic.