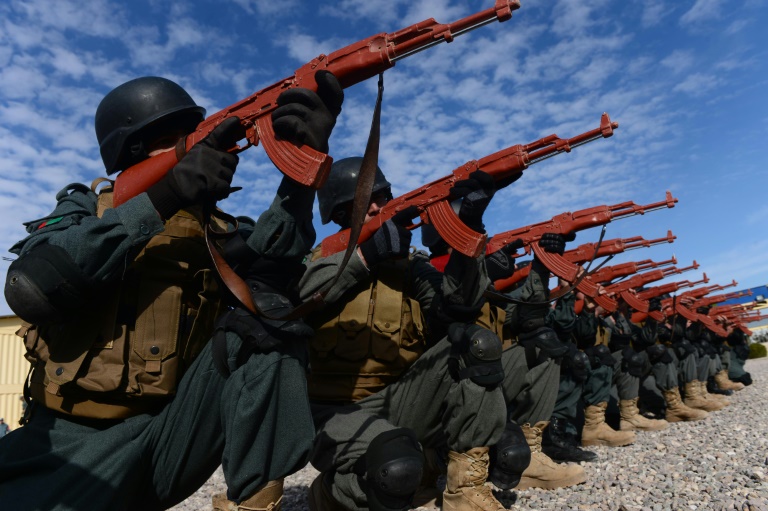 At least 11 Afghan soldiers have been killed in a Taliban ambush in western Afghanistan, officials said Monday, as troops face their first fighting season without NATO combat support.

The militants launched their annual spring-summer offensive in late April, vowing nationwide attacks in what is expected to be the bloodiest summer for a decade.

Afghan troops and police, stretched on multiple fronts and facing record casualties, are struggling to rein in the militants even as the government makes repeated efforts to jump-start peace negotiations.

“The Taliban ambushed a convoy of soldiers in Karukh district of Herat, killing 11 Afghan army soldiers last evening. The soldiers were riding in pick-up trucks,” Ehsanullah Hayat, spokesman for the governor of the western province of Herat, told AFP.

Najibullah Najibi, a spokesman for the army in western Afghanistan, confirmed the attack and said four soldiers were wounded.

The Taliban have stepped up their attacks on Afghan security forces since the start of their spring offensive, named “Azm” (Determination) this year.

Dozens of protesters took to the streets in Charikar, the capital of Parwan province north of Kabul, on Monday to complain about an operation by foreign forces overnight.

They were unhappy that a house was raided and an ammunition cache destroyed in the Bayaan district of the province.

The protesters set tyres on fire in the main market and chanted anti-American slogans, according to local TV reports.

“The people got angry because they (foreign forces) detonated the cache at midnight while they were sleeping,” said provincial police chief General Mohammad Zaman Mamoozai.

He said the cache dated back to the struggle against the Soviet occupation in the 1980s, complaining that local authorities were not warned about the raid, which caused no casualties.

Abdullah Abdullah, the government’s chief executive, called for calm and said he was in contact with General John Campbell, the commander of NATO forces in Afghanistan, about the issue.

Night raids and house searches by foreign forces in their fight against the Taliban were one of the most controversial issues in the time of former President Hamid Karzai, often causing disputes between Washington and Kabul.

The night raids and house searches are traditionally opposed by many Afghans, especially in conservative rural areas, where people see them as an “invasion” of their families and women.

Parwan is home to Bagram airfield, the biggest foreign forces base in Afghanistan that often comes under Taliban rocket attacks from nearby villages.