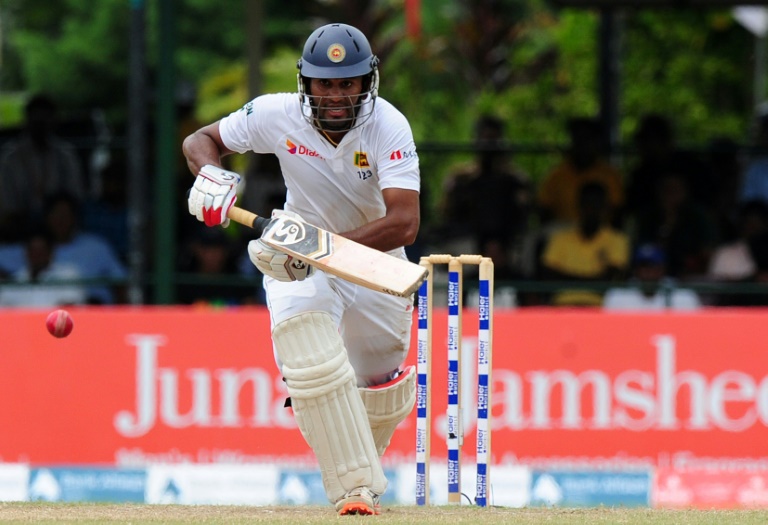 Dimuth Karunaratne hit 50 off 56 balls as Sri Lanka trounced Pakistan by seven wickets in the second Test in Colombo on Monday to square the three-match series.

Chasing 153 to win, the hosts made light of a delayed start of 30 minutes due to a wet outfield and raced to victory in 26.3 overs before lunch on the fifth and final day at the P. Sara Oval.

Karunaratne and skipper Angelo Mathews added a brisk 72 for the third wicket after two wickets had fallen with the score on 49 to raise Pakistan’s hopes.

Mathews remained unbeaten on 43, sharing a fourth-wicket partnership of 32 with Lahiru Thirimanne, who hit the winning boundary off leg-spinner Yasir Shah.

The win ended Sri Lanka’s three-match losing streak at the P. Sara Oval and set up a potentially thrilling finale when the third Test begins at the Pallekele stadium near the popular hill resort of Kandy on Friday.

Mathews said it was a good comeback from his team after losing the first Test in Galle by 10 wickets.

“The boys showed a lot of character after that defeat,” he said, adding it was important to go for quick runs in the second innings because of the threat of rain.

“We wanted to bat positively because we were not sure about the weather,” he said. “We gave the boys the green signal to play freely because it is easy to get bogged down.”

Pakistan captain Misbah-ul-Haq said being bowled out for 138 on the first day after electing to bat had cost his team dearly.

“That session from lunch to tea on the first day really dented us because we lost all our main batsmen in that period,” he said. “It made all the difference in the match.

“The batting in the first innings is not consistent enough and that is a big worry for us. We put up a big score at Galle and here we collapsed from 74 for three to 138 all out.

“The bowling has been good, especially Yasir who now has 54 wickets from his first nine matches. He is a match-winner, but the injury to Wahab (Riaz) was a big blow.”

Pakistan pace spearhead Wahab suffered a hairline fracture of his left hand while batting on the first day and has been ruled out of the series.

“Hopefully we will recover from this loss and try and win the final Test,” said Misbah.

Kithuruwan Vithanage, promoted to open the batting in place of Kaushal Silva, smashed four boundaries and two sixes in an aggressive 34 off 23 balls.

The left-hander had contributed the major share of the 49-run opening stand with Karunaratne, when Pakistan hit back with two wickets off successive balls.

Vithanage holed out in the deep off the last ball of left-arm spinner Zulfiqar Babar’s second over after striking two sixes earlier in the over.

Veteran Kumar Sangakkara, playing his last Test match against Pakistan, fell to the first delivery he faced, caught at short-leg by Azhar Ali off Yasir.

Sangakkara, 37, Test cricket’s leading current run-getter, said on Saturday he will appear in only the first two Tests against Pakistan and play two more against India in August before retiring from the international game.

Karunaratne had hit four boundaries when he was leg-before to Yasir with 32 runs still needed for victory, but vice-captain Thirimanne partnered his skipper to an easy win.

Hard-working Sri Lankan seamer Dhammika Prasad was named man of the match for his seven wickets in the Test.