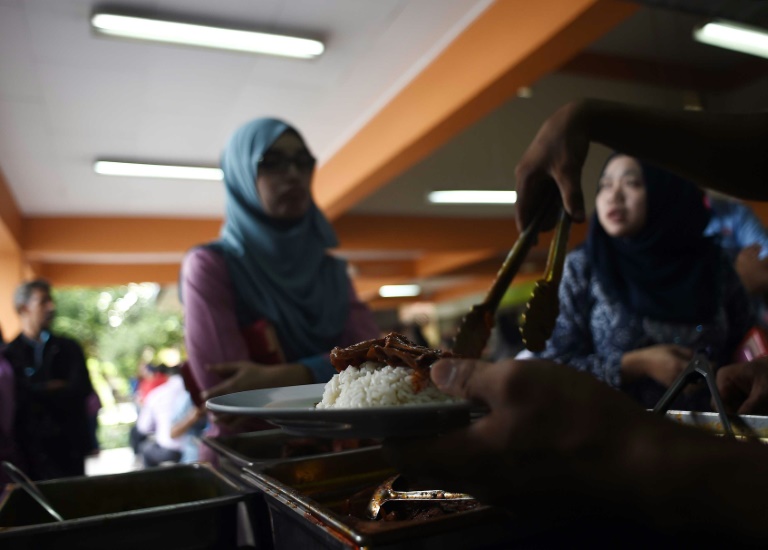 Zainal Abidin’s tiny food stall serves just one item and opens for only a few hours but is besieged each day by nearly a thousand customers clamouring for Malaysia’s undisputed national dish, nasi lemak.

“We need more rice in here!” shouted a sweaty teenager working Zainal’s stall as customers waited expectantly in a long queue amid the aroma of coconut milk and fried anchovies.

Italy has its pasta, Japan its sushi and England its fish and chips.

But perhaps no dish is more ubiquitous or beloved in Malaysia as nasi lemak, rice cooked with coconut milk and served with golden-fried anchovies, roasted peanuts, a boiled egg, sliced cucumbers and a dollop of a fiery chili concoction sambal.

Born as a cheap breakfast, nasi lemak is today eaten throughout the day, and is on an expanding culinary sojourn with the classic recipe continually tweaked, and even innovations such as nasi lemak pizza and ice cream appearing on menus.

“Demand for nasi lemak has gone up a lot over the years because it is not just for breakfast anymore,” said Zainal, 57, whose mother first opened their “Nasi Lemak Tanglin” stall in 1948.

Usually translated as “fatty rice”, nasi lemak also is served in neighbouring countries like Indonesia, Singapore and Brunei, but nowhere is it more deeply rooted in the food culture than Malaysia.

Farmers and fishermen are believed to have thrown it together as a breakfast rich in necessary carbs, protein, fats and delivering a spicy kick.

But it is now ubiquitous across the country, including higher-end restaurants and hotels.

At Kuala Lumpur’s upscale Tujo Bar-serrie & Grill, Malaysia and Italy have been united in a nasi lemak pizza — thin crusts infused with either squid ink or spinach, and topped with anchovy, onions, roast peanuts and sambal.

“Tourists like it too, but locals especially get quite excited because they canâ€™t imagine it when they read about it,” said Samantha Lee, a Tujo spokeswoman who said a pasta version will debut soon.

“These innovations illustrate Malaysia’s continuing fascination with nasi lemak,” Loong said, adding that experiments with the dish have begun to take off in the past two years.

Ong Kee Win, who runs the trendy Cielo Dolci cafe known for its original ice creams including beer and soy flavours, came up with a nasi lemak ice cream in 2012.

“People thought I was crazy. Nobody wanted to try it at first,” Ong said. “But these days, more locals and foreigners want to try it.”

After cooking his coconut rice, Ong churns it together with a secret gelato base, later topping it off with frozen peanuts, anchovies and chili flakes.

The end-product, redolent of coconut, tastes uncannily like a thick, creamy, frozen version of the real deal.

Few traits are as effective in promoting a country and its culture abroad as cuisine, yet nasi lemak — despite its importance at home — is yet to join the globally recognised ranks of sushi and pasta.

Tourism officials, however, last year marketed nasi lemak as a slice of Malaysian exotica in a promotional campaign in Japan.

The dish also got some overseas publicity when a Malaysia-born woman won the popular MasterChef television cooking contest in Britain with a nasi lemak dish.

“Nasi lemak hasn’t become globally famous yet because of the spiciness but experimentation will help as we put nasi lemak in a different context now,” said Ong.

The dish’s expanding frontiers and popularity at home were on display at a recent nasi lemak festival in Kuala Lumpur that drew thousands seeking to taste the creations of some of the capital’s top chefs.

These included vegetarian and organic versions that replaced anchovies with mushroom stalks coupled with creatively fried vegetables and brown rice.

Another recipe involved frying the coconut rice in a wok with a special chili formula that turned it all a fiery red.

Across Malaysia, other versions may include sides of fried chicken, squid marinated and cooked in chili sauce, fried beef lungs, or an array of other touches.

But adherents aren’t about to forsake the time-tested original.

Dean Johari flew in specially for the festival, saying the standards of classic nasi lemak in his native neighbouring Singapore have slipped.

“It brings back childhood memories, and of a time that was simpler. To me, that is priceless,” he said, finishing off a plate.