Solar Impulse past ‘point of no return’ from Japan to Hawaii | Newsmobile
Saturday, July 2, 2022 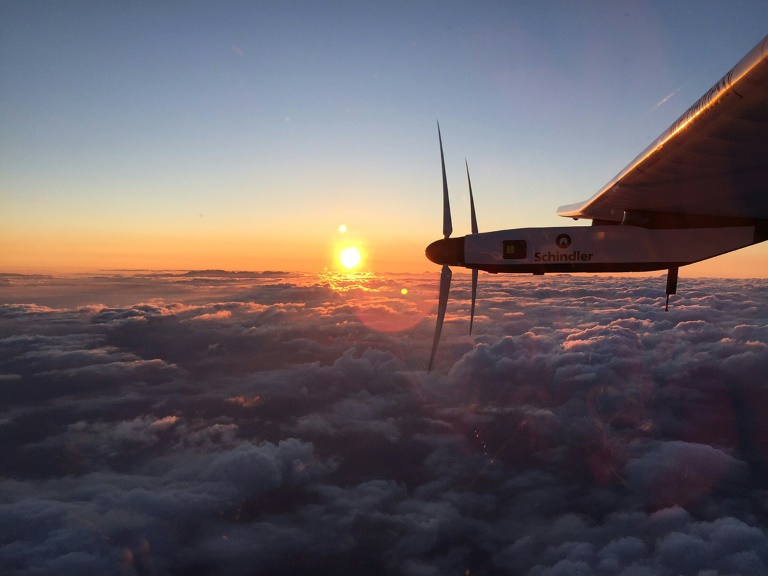 A revolutionary solar-powered aircraft was past “the point of no return” and flying over the Pacific Ocean bound for Hawaii Monday, on the most ambitious leg of its quest to circumnavigate the globe.

After a month of delays in Japan and a last-minute false start last week, mission controllers declared Solar Impulse 2 had taken off from the central Japanese city of Nagoya shortly after 3:00 am (1800 GMT Sunday).

“No Way Back! This is a one way ticket to Hawaii,” tweeted @solarimpulse. Pilot “AndrÃ© Borschberg has passed the point of no return and must now see this 5 days 5 nights flight through to the end”.

Around 12 hours after take-off, the aircraft was more than 1,000 kilometres (620 miles) into its 7,900-kilometre flight, according to the Solarimpulse.com website, which showed the flight expected to describe an arc between Japan and Hawaii.

“All of the calculations, of the trajectory, of the flight, of the altitude, of the timing, all this is made so we can fly over the layer of clouds on the third day, and also over the clouds on the fifth day,” Piccard said, referring to the two days of the voyage forecast to be cloudy.

The eighth leg of the round-the-world bid is considered the trickiest so far, with nowhere to land if things go wrong.

In the worst-case scenario, that would mean the 62-year-old Borschberg ejecting from his super-lightweight cockpit with a parachute and a life raft, said Piccard.

He will inflate “the life raft and wait for another plane to bring… life support. And then the pilot can stay in this big raft for maybe three days until a ship can come and rescue him.”

Borschberg has said he will keep in shape during his long solo flight by doing yoga, and will sleep 20 minutes at a time, normally at night.

But he has also previously admitted that being cooped up in the 3.8-cubic-metre (130-cubic-foot) cockpit for long stretches of time is a challenge.

The featherweight flying machine was not supposed to land in Japan, but bad weather en route from Nanjing in China to Hawaii forced a diversion at the start of June.

The plane has since been stranded in Japan, with the crew scouring long-range forecasts for a favourable weather window.

A chance to restart the record-breaking journey presented itself last week, with the plane due to leave Nagoya early Wednesday, but mission chiefs pulled the plug at the 11th hour due to bad weather over the Pacific Ocean.

The successful departure on Monday was particularly welcome news for the team, after Piccard warned long delays in Nagoya might see the plane trapped in Japan for the winter, as the days begin to shorten.

But after a shaky few hours immediately after take-off, things started to look up.

“It was very, very close to coming back to Nagoya,” he told AFP on Monday. “And then we passed the point of no return, then we said OK we go now for Hawaii.”

Solar Impulse 2 has 17,000 solar cells and on-board rechargeable batteries with a top speed of 140 kilometres an hour.