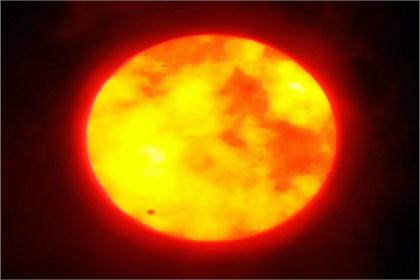 ESA’s Venus Express, which completed its eight-year study of the planet last year, used a near-infrared channel of the spacecraft’s Venus Monitoring Camera (VMC) to map thermal emission from the surface through a transparent spectral window in theÂ planet’s atmosphere, and spotted localised changes in surface brightness between images taken only a few days apart.

Lead author Eugene Shalygin from the Max Planck Institute for Solar System Research (MPS) in Germany said that they had now witnessed several events where a spot on the surface suddenly gets much hotter, and then cools down again.

These four ‘hotspots’ were located in what are known from radar imagery to be tectonic rift zones, but this is the first time we have detected that they are hot and changing in temperature from day to day. It has been the most tantalising evidence yet for active volcanism.

The hotspots are found along the Ganiki Chasma rift zone close to theÂ volcanoes Ozza Mons and Maat Mons. Rift zones are results of fracturing of the surface, which is often associated with upwelling of magma below the crust. This process can bring hot material to the surface, where it may be released through fractures as aÂ lavaÂ flow.

It shows thatÂ VenusÂ was still active and changing in the present day.