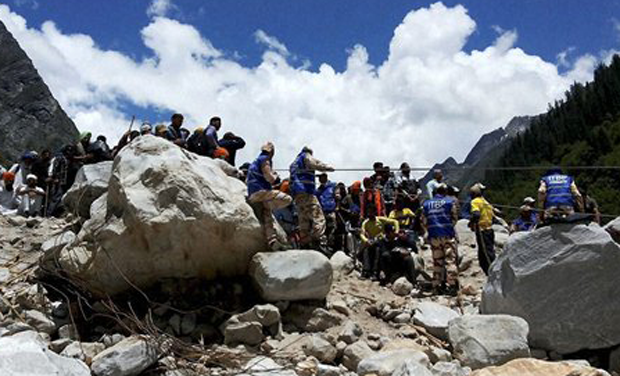 Over 1,000 pilgrims stranded on way to the Himalayan shrines in Uttarakhand have been evacuated as the pilgrimage to Badrinath and the Sikh shrine of Hemkund Sahib in Chamoli district remained disrupted for the fourth consecutive day on Sunday.

Pilgrimage to Hemkund Sahib has been suspended after a bridge near Bhyundar village along the trek route was washed away in rains and a substitute for it is under construction.

Stranded pilgrims were being ferried in vehicles from Badrinath to Benakuli and Lambagad to Joshimath, Chamoli’s Disaster Management Officer Nand Kishor Joshi said.

About one thousand pilgrims have so far been evacuated to Joshimath, he said.

Pilgrims were also being airlifted in two choppers from Ghanghariya and ferried to Joshimath, he said.

About 350 pilgrims have been brought from Hemkund Sahib in choppers to Joshimath.

Most of the Sikh pilgrims who were earlier stranded in Ghanghariya have now safely reached their destinations, Hemkund Gurudwara Prabandhak committee chief Seva Singh said.

Heavy rains on Wednesday and Thursday had caused landslides and blocked the Badrinath National Highway at a number of places disrupting the yatra whereas a wooden bridge along the trek route to Hemkund Sahib had been washed away.

Blockage of the Badrinath highway and washing away of the wooden bridge over Pushpawati river in Bhyundar village on the way to Hemkund in Chamoli district had left over 11,000 devotees stranded.

Seva Singh said the Indian Army and ITBP personnel were helping people cross over Pushpavati river through temporary bridges made with the help of ropes.

However, the hardships faced by pilgrims have failed to dampen the spirits of those still waiting at different points in Chamoli district for the roads to be restored so that they could visit the two shrines to pay obeisance.

Those on their way to Hemkund sahib will have to wait for at least two to three days for the alternative bridge over Pushpavati river in Bhyundar to be completed before they can resume their journey, Seva Singh said.