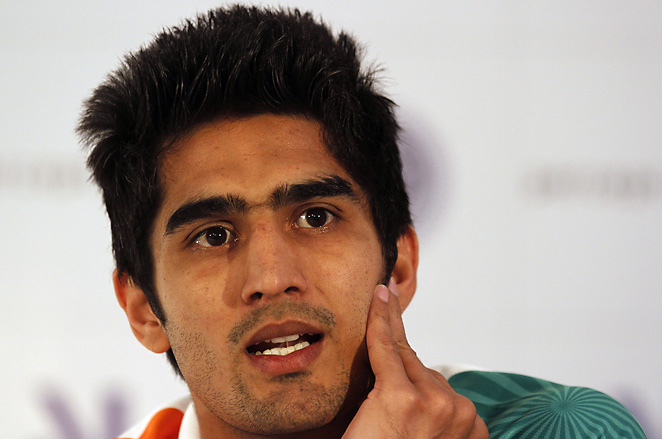 New Delhi: In what can be termed as a big blow to the Indian hopes, Vijender Singh will not represent the Indian tricolour in any international event from now on, including the Rio Olympics.

Yes, you got that right.

The ameteur has just turned professional.

The Indian boxer, who had wowed the world with his Beijing Olympics bronze medal in 2008 has inked a deal with Queensberry Promotions through IOS Sports & Entertainment. As per this deal, Vijender will fight a minimum of six times in the first year. Now, Vijender will be shifting base to Manchester, England, and train under renowned trainer Lee Beard.

“I’m excited to turn pro and looking forward to the new chapter of my life. I want to train hard and perform for my country at the global level. My immediate goal will be to work hard and make a good boxing record in the next year or so.”

Even though itâ€™s a landmark moment for the middleweight boxer, bringing him more name, fame and moolah, yet, itâ€™s an incredible loss for the Indians. He was one sure shot medal prospect that we had, and his turning professional means he will Â no longer be able to represent India in any international platform. Even though we have no dearth of talent, yet, such a groomed and ready to win boxer was a difficult find, and now, we no longer have it.

The money is the biggest reason here. Despite being an Olympic bronze medalist, Vijender had to try his luck in other spheres — bollywood, small screen and all of that. Unlike cricketers and other big shot sportspersons, Vijender never signed the big endorsement deals. And maybe, the lack of training facilities, lack of exposure and shabby treatment of sportspersons pressed this call.

Vijender was the apple in the Indian boxing circleâ€™s eyes. In a sparkling career in which he represented India, he bagged the Silver at the 2006 and 2014 Commonwealth Games; bronze at the 2006 Asian Games, 2008 Beijing Olympics, 2009 World Amateur Championships and 2010 Commonwealth Games; Gold at the 2010 Asian Games, and rated as the world’s number one middleweight in 2009.