Home Face Off Man of peace 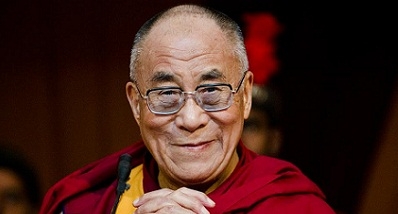 A rosary and a bell which belonged to the deceased Dalai Lama was shown to this two-year-old who instantly identified the items shouting “It’s mine, it’s mine!” The successor was found.

He led a tireless international movement for Tibetâ€™s freedom, a crusade unflinching in its commitment to the Buddhist principles of peace, compassion, and non-violence.

Known as the Ocean of Mercy, Holder of the White Lotus, and Protector of the Land of Snows, his followers regard him as anÂ incarnation of Buddhist God.

The 14th Dalai Lama,Â Lhamo DÃ¶ndrubÂ was born on July 6, 1935Â in a small village Taktser just outside the current boundaries of Tibet. His parents were farmers.

When he was two years old, a search party of Buddhist officials recognised him as the reincarnation of the 13 previous Dalai Lamas and he was enthroned before he turned four. Young Lhamo was renamed Tenzin Gyatso and proclaimed the 14th Dalai Lama.

He was educated at a monastery where he learnt about logic, Tibetan art and culture, Sanskrit, medicine and Buddhist philosophy.

He went on to achieve the Geshe Lharampa Degree, a doctorate of Buddhist philosophy.

As the Dalai Lama

In 1950, at the age of 15, Tenzin assumed full political power as the Dalai Lama. However, his governorship was short as China invaded Tibet.

Peace talk attempts failed with the Chinese leaders and the Dalai Lama and his closest advisers believed the Chinese government was planning to assassinate him. Consequently, he and several thousand followers fled to Dharamshala in northern India and established an alternative government there.

In the early years of exile, the Dalai Lama appealed to the United Nations on the question of Tibet, resulting in three resolutions adopted by the General Assembly in 1959, 1961 and 1965. In 1963, the Dalai Lama disseminated a draft constitution for Tibet which assures a democratic form of government.

In 1970, he opened theÂ Library of Tibetan Works and ArchivesÂ in Dharamshala which houses over 80,000 manuscripts and important knowledge resources related to Tibetan history, politics and culture.Â

In 1987, at the Congressional Human Rights Caucus, The Dalai Lama set out his five-point plan for Tibet. Firstly, he asked for Tibet to become a â€œzone of peaceâ€; secondly, he wanted to see an end to the importation of ethnic Chinese into Tibet.

He also called for the restoration of Human Rights and Democratic Freedoms in Tibet; a ban on the manufacture of nuclear weapons and the dumping of nuclear waste in his country by the Chinese government; and the continuation of â€œearnest negotiationsâ€ regarding the future of Tibet.

The Dalai Lama has written numerous books and conducted hundreds of conferences, lectures and workshops at major universities and institutions throughout the world, discussing engaging in wisdom, compassion and, more recently, environmental sustainability.

He has made numerous appearances at interfaith services and has met with several heads of other religions, including Pope John Paul II; Gordon B. Hinckley, the president of the Church of Jesus Christ of Latter-day Saints; and Patriarch Alexius II, of the Russian Orthodox Church.

In the run-up to the 2008 Beijing Olympics, unrest broke out in Tibet in anticipation of media attention and increased repression by the Chinese government. The Dalai Lama pleaded for calm and condemned Chinese violence.

In 2011, the Dalai Lama said that he planned to hand his political responsibilities to an elected representative, saying such a move was in the best interests of the Tibetan people.

The 14th Dalai Lama has appeared in several non-fiction films including 2014â€™s â€˜Monk with a Cameraâ€™ and Dalai Lama Awakening.

He has been depicted as a character in various other movies and television programsÂ including Kundun (1997) and Seven Years in Tibet (1997).

The longest living Dalai Lama is tech savvy and has his own pages onÂ Twitter,Â Facebook,Â Instagram andÂ Google Plus.

In 1989, he was awarded the Nobel Peace Prize for his nonviolent efforts for the liberation of Tibet and his concern for global environmental problems.Â