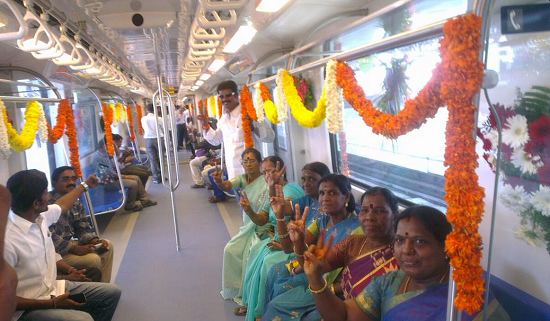 Chennai: After many other cities, the wait for Chennai is finally over as Chief Minister J Jayalalithaa opened the 10km elevated section of metro rail from Koyambedu to Alandur through video-conferencing from the state secretariatÂ on Monday.

The metro will bear four coaches with a capacity of 1276 passengers.Â Being built at a cost of over Rs 14,000 crore, phase-1 of the Chennai Metro Rail would cover a 45-km stretch in two corridors comprising 32 stations.Â Â in the city. Designed as half underground and the rest elevated, onecorridor is between Washermanpet and Airport and the other, from Chennai Central to St. Thomas Mount.

The exact time of the inauguration, however, was not officially announcedÂ on Sunday. The launch was originally scheduled forÂ Sunday.

The ambitious project was conceived by the previous DMK regime in 2008. It was approved by the Centre in early 2009, and construction began later that year. However, it gathered pace in the last four years of the Jayalalithaa government.

The first train is expected to move out of Alandur station and preparations are in full swing in the stations that fall on the first stretch. Nine rakes will be used to run services fromÂ 6am to 11pmÂ orÂ midnight.

The stations on the route between Koyambedu and Alandur â€” CMBT, Arumbakkam, Vadapalani, Ashok Nagar and Ekkatuthangal â€” would complement public transportation on Jawaharlal Nehru Salai or 100ft Road and link EMUs at Alandur railway station. The elevated corridor is almost complete between Alandur and Little Mount, while underground work is gathering pace on Anna Salai and Poonamallee High Road.Â

Urban Development MinisterÂ Venkaiah Naidu had said last year that the project between the Koyambedu-Alandur stretch will be launched by March 2015. After missing such deadlines, the project is now all set to see the inauguration soon albeit in a stretch of a corridor in phase-1.