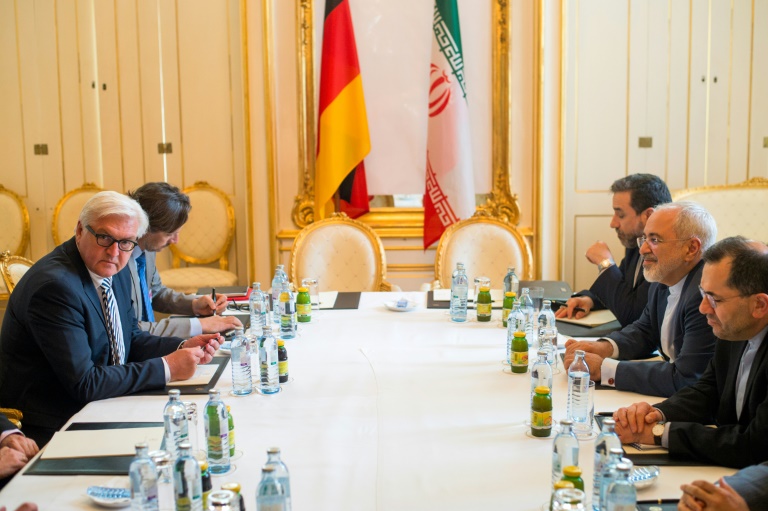 Iran’s foreign minister flew home late Sunday for consultations after an intense day of talks with major powers, as a looming deadline for a historic nuclear deal looked set to slip by a few days.

A senior US official at the talks in Vienna would not say there was no chance of nailing down the accord by Tuesday, but admitted “it’s fair to say the parties are planning to stay past (June 30th) to keep negotiating.”

An Iranian official said there was “no desire or discussion yet” on a longer extension, comments echoed by EU foreign policy chief Federica Mogherini, who said “postponement is not an option”.

“I would say that the political will is there. I’ve seen it from all sides,” Mogherini told reporters at the end of a long day.

“We’ve tasked negotiating teams to continue work immediately tonight on the texts” for an accord, she added before leaving Vienna.

Iranian Foreign Minister Mohammad Javad Zarif meanwhile flew back to Tehran for talks with senior officials, although it was unclear if this was a good or a bad sign. He was expected back in the coming days.

“We’ve always said ministers may need to go back and forth” to consult with their capitals, the US official told reporters, adding “that’s a good thing.”

“We have given the necessary instructions to our negotiating teams to continue working on the text,” Zarif told state television after a final meeting with US Secretary of State John Kerry before heading home.

Iran and the P5+1 group — Britain, China, France, Germany, Russia and the United States — are seeking to flesh out the final details of an accord that builds on a framework deal reached in Lausanne in April.

It is hoped a deal would end a standoff dating back to 2002 which has threatened to escalate into war and poisoned the Islamic republic’s relations with the outside world.

According to the Lausanne framework, Iran will slash the number of its uranium enrichment centrifuges, which can make nuclear fuel but also the core of a bomb, shrink its uranium stockpile and change the design of the Arak reactor.

In return it is seeking a lifting of a complicated web of EU, US and UN sanctions which have choked its economy and limited access to world oil markets.

But finalising what will be a highly complex final deal is fraught with potential pitfalls.

This includes the exact timetable of steps by Iran, the timing and pace of this sanctions relief and UN access to Iranian military bases to investigate any suspicious behaviour.

– No deal better than a bad deal –

“No deal is better than a bad deal. There are red lines that we cannot cross and some very difficult decisions and tough choices are going to have to be made by all of us,” Hammond told reporters.

“In recent days it has become obvious that when it comes to the question of how… we can be sure that what we agree really is adhered to, there has been some discussion,” German Foreign Minister Frank-Walter Steinmeier said.

Any deal must stand up to intense scrutiny by hardliners in Iran and the United States, as well as Iran’s regional rivals Israel, widely assumed to have nuclear weapons itself, and Saudi Arabia.

“It is still not too late to go back and insist on demands that will genuinely deny Iran the ability to arm itself with nuclear weapons and prevent it from receiving vast sums to finance its aggression,” Israeli Prime Minister Benjamin Netanyahu said Sunday.

Kerry, who is still nursing a broken leg, remained in Vienna. French Foreign Minister Laurent Fabius and Hammond left late Sunday, and Steinmeier was expected to follow suit on Monday.