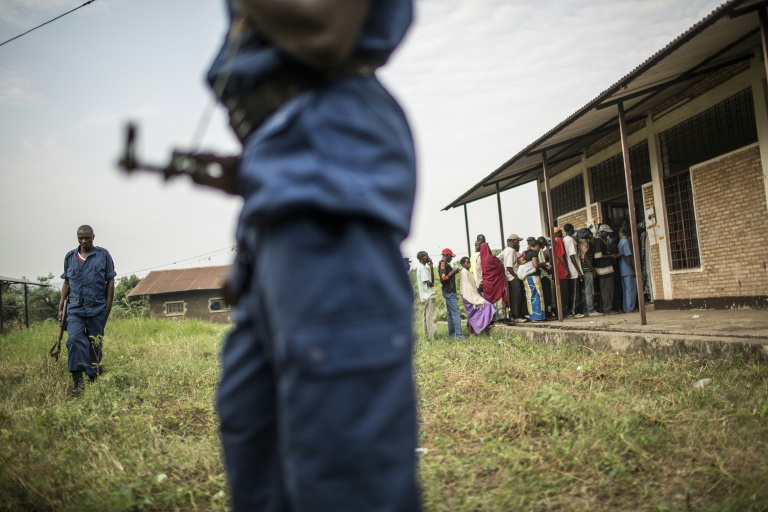 Burundians voted Monday in controversial elections marked by grenade attacks, an opposition boycott and international condemnation, with the election commission claiming an “enormous” turnout despite many polling stations remaining quiet.

Assailants threw grenades both in the capital Bujumbura and at some provincial voting centres ahead of the parliamentary and local elections.

The latest unrest follows weeks of violence and a failed coup in which more than 70 people were killed, sparked by President Pierre Nkurunziza’s defiant bid for a third term.

Ruling party campaign chief Willy Nyamitwe, who is also Nkurunziza’s head of communications, said he was “very satisfied”, adding that the “people responded massively and early.”

The European Union warned the polls would “only exacerbate the profound crisis”, while former colonial power Belgium said the polls were not credible and could “further divide the country.”

No official figures were available, but in polling stations in Bujumbura queues were short and turnout sparse, with election officials at times outnumbering voters.

“They invent the numbers,” said opposition leader Pacifique Nininahazwe, who organised anti-government protests before fleeing into exile. “For us, there is no election today.”

Fellow opposition leader Charles Nditije criticised “a parody of elections, unfair polls without any credibility,” denouncing what he said was electoral fraud and claiming voters could cast ballots without needing to show identification.

Polls officially closed at 1400 GMT, although voting continued in some stations where the opening had been delayed.

Results are expected within three or four days, the election commission said.

UN Secretary General Ban Ki-moon earlier called for the voting to be delayed, as Burundi faces its worst crisis since civil war ended nine years ago.

Police patrolled the streets of Bujumbura, especially in areas of high opposition support, where the worst of the recent violence has taken place.

Few civilians were seen at the polling stations in opposition areas. At some stations the people queueing were mainly soldiers or police.

“The protesters closed roads to block us, but we went with the police,” said Annick Niyonkuru, one of the few civilians waiting to vote in the capital’s Musaga district.

Outside the capital, polling centres also appeared quiet. But in the ruling party stronghold of Gitega, turnout seemed far higher.

“It was important to vote today, it has already been postponed twice,” said Jean Nepomcene, a carpenter, one of the few voters agreeing to speak.

On the eve of the election, top ruling party official and parliament head Pie Ntavyohanyuma said he had joined some 127,000 other Burundians who have fled the country, denouncing Nkurunziza’s “illegal” bid to stay in power for a third term.

Opponents say his bid for another term is unconstitutional and violates a peace accord that paved the way for the end of 13 years of civil war in 2006. Presidential polls are due on July 15.

Several top officials — including a deputy vice-president as well as members of the election commission and constitutional court — had already fled the poverty-stricken, landlocked country.

The African Union refused to send observers as the “necessary conditions are not met for the organisation of free, fair, transparent and credible elections.”

The only international observers are those of the UN, who said that their presence should not be “interpreted as a validation” of the process.

Almost four million people were registered to vote, but the opposition boycotted the polls, as they did in the last elections in 2010, claiming it was not possible to hold a fair vote.

Civil society groups backed the boycott in a joint statement calling on voters to skip the “sham elections” and urging the international community “not to recognise the validity” of the polls.

Under the constitution, based on peace deals that ended the civil war, there are strict ethnic quotas in parliament.

Parliament must be made up of 60 percent from the majority Hutu people — who make up some 85 percent of the population — with the remaining 40 percent of elected seats reserved for the minority Tutsi.