Home Sports Gatlin blazes to 200m win in 19.57sec at US athletics championships 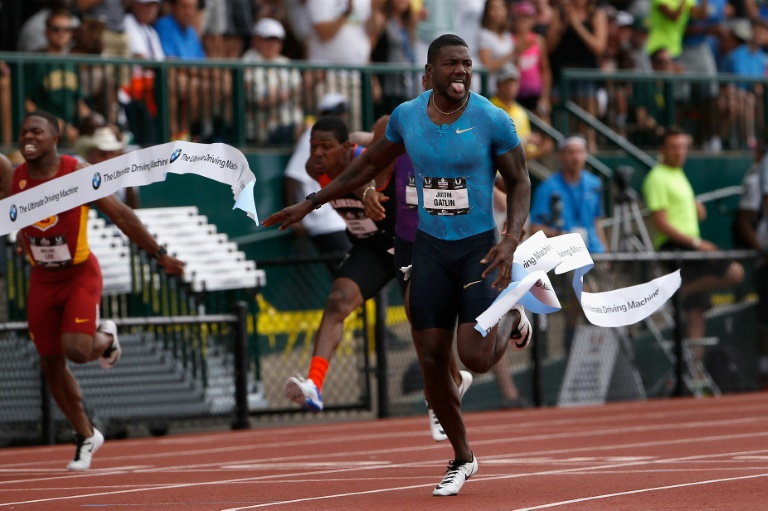 Controversial sprinter Justin Gatlin fired a World Championships warning shot, winning the 200m title at the US athletics championships in a blistering 19.57sec.

“I wanted to come out and make a statement, and that’s what I did,” Gatlin said on Sunday, after a career-best that improved on the season-leading 19.68 he set on the same Hayward Field track at the Eugene Diamond League meeting in May.

The 33-year-old, who completed a four-year doping ban in 2010, is now the fifth-fastest man of all time in the event, behind Usain Bolt — who holds the world record of 19.19 — Yohan Blake, Michael Johnson and Walter Dix.

With his dominance this season — he also owns the fastest 100m time of the year of 9.74sec — he has set the stage for a scintillating showdown with Bolt in both the 100m and 200m at the August 22-30 World Championships in Beijing.

“I’d say the 100, just because it comes first,” Gatlin said of his best world title hope. “But I’m going to put all my effort into both of them.

“A lot of people try to peak for the World Championships. I just want to maintain,â€ added Gatlin, who came off the turn well in front and powered home.

“I know I had a great start, attacked coming off the turn and ran a great 150,” said Gatlin, who called it “the most complete technically 200 meter I ever ran.”

His training partner Isiah Young was a distant second in 19.93 with veteran Wallace Spearmon third in 20.10.

Even as he has dominated the sprint world this season, Gatlin has found his past doping transgressions in the spotlight, as has US team-mate Tyson Gay — who booked his Beijing berth with a 100m victory on Saturday.

Current allegations also cast a cloud over these championships, after Alberto Salazar, coach of US distance runner Galen Rupp, was accused in a BBC/ProPublica documentary this month of infractions.

Kara Goucher, one of the athletes who has leveled allegations against Salazar, fanned the flames on Sunday, hitting back at the coach for branding her a liar.

“I stand by my statements,” Goucher said, even as Rupp again voiced support for his coach and their practices.

“I’ve got nothing to hide,” Rupp said after a third-placed finish in the 5,000m won by Ryan Hill. “We believe in clean sport.”

Since Oliver enjoys a bye as the defending champ, fourth-placed finisher Aleec Harris also punched his Beijing ticket in 13.25. Fifth-placed Jeffrey Porter finished in the same time — losing out on a trip to Beijing by an agonizing five one-thousandths of a second, Harris’s 13.241 to Porter’s 13.246.

Although he was pleased with the national title, Oliver made it clear where his priorities lie.

“Eight weeks from yesterday is the final in Beijing,” he said.

Shamier Little won the women’s 400m hurdles, becoming the first athlete since 2004 to win both the NCAA collegiate title and US crown.

Little’s time of 53.83 gave her the top two times in the world this year, along with her season-leading 53.74.

Cassandra Tate was second in 54.01 followed by Kori Carter in 54.41, while American record-holder Lashinda Demus missed out on a Beijing berth as she finished fourth in 54.44.

Reese Hoffa, the 37-year-old 2007 world champion finished fourth, but will also head to Beijing with a bye as the 2014 Diamond League winner.

Jenn Suhr will be looking to add a world title to her 2012 Olympic pole vault gold medal after lifting the national title with a season-leading vault of 4.82m, a slight improvement on her own prior season’s best of 4.81.