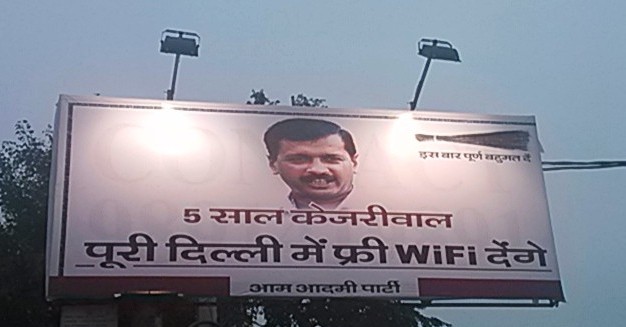 New Delhi: In some good news for the Internet-savvy, Delhi’s colleges, including ones under Delhi University, and villages will avail free Wi-Fi facility by the end of this year.

In its maiden budget, the AAP government has set aside Rs 50 crores for the free Wi-Fi project to be executed in colleges and around 300 villages of the national capital in the first phase.

“As per plan, we will complete the first phase of free public Wi-Fi by the end of this year but I expect to complete it much before the schedule. Government websites will be free and limited access of other contents will be provided,” Deputy Chief Minister Manish Sisodia said.

All government websites can be accessed anytime through this service.

“We are trying to set a limit for browsing for personal and entertainment content,” Sisodia also said.

The Information Technology department of the AAP government is in the process of setting up hotspots in the first phase of implementation.

Officials said they have also studied the existing system in cities like Stockholm, Barcelona, Shanghai and Singapore, adding that the AAP government intends to set up 50,000 to 80,000 hotspots across the capital to complete the project.

“There are various revenue models in the project and the government is contemplating on these. Government is committed to provide best Wi-Fi service to the people of Delhi,” Sisodia added.

In the run-up to the Delhi Assembly polls, the Aam Aadmi Party had promised to make Wi-Fi free in public spaces across Delhi.