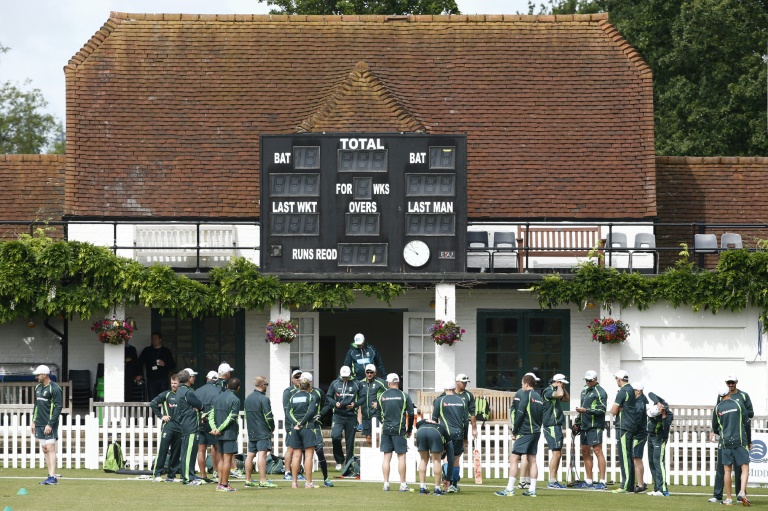 Daniel Bell-Drummond’s sparkling hundred for Kent could not prevent Australia winning the opening match of their Ashes tour by 255 runs at Canterbury on Sunday.

Almost 40 years to the day since England great Colin Cowdrey made a match-winning 151 not out for Kent against Australia on the same St Lawrence ground, Bell-Drummond delighted a new generation of fans with an innings of 127.

However, the 21-year-old’s effort was in a losing cause with Kent, set an improbable 550 for victory, bowled out for 294 in their second innings shortly after tea on Sunday’s fourth and final day.

Bell-Drummond, lbw to fast bowler Mitchell Johnson for nought in the first innings was initially just pleased to have avoided a ‘pair’ (two noughts in the same match).

“It’s the best day of my career by a mile,” opening batsman Bell-Drummond told reporters afterwards.

“I can’t believe what’s just happened. It’s the best attack in the world and I watched them on the TV when I was growing up.”

He added: “All I wanted to do was get off a pair in the first place to be honest and then it was a case of taking it from there.”

For Australia coach Darren Lehmann, fresh from overseeing his side’s 2-0 Test series win in the West Indies, it was just the start he wanted as the side go in search of their first Ashes success on English soil in 14 years.

“The change of conditions, to come down here and play in front of a good crowd and great facilities, we’re really thankful to obviously Kent and Canterbury as a city, and pleased with the hit out for the lads.”

After Australia had declared on their overnight 322 for four, opener Bell-Drummond looked in good touch.

He struck three fours in an over from fast bowler Ryan Harris including a fine straight drive.

Fellow opener Joe Denly made a brisk 22 before he was bowled middle stump by first change Peter Siddle.

Former England batsman Rob Key had anchored Kent’s first innings 280 — made in response to Australia’s imposing 507 for eight declared — with 87.

But Key could only manage 14 on Sunday before, for the second time in the match, he fell to leg-spinner Fawad Ahmed.

Bell-Drummond, however, accelerated in style after getting to lunch on 66 not out.

He was especially severe on Ahmed, taking 18 off one over from the leg-spinner including a cut four, a straight-drive six, another cut boundary and a clip off his legs to the mid-wicket rope.

Bell-Drummond, long regarded as one of England’s most promising young players, wasn’t finished with Ahmed as a pull for four and two successive sixes in three balls from the spinner saw him to a 92-ball hundred.

What was just the seventh first-class century of Bell-Drummond’s fledgling career contained 21 fours and three sixes.

He was eventually lbw to Harris.

Not long afterwards, rain briefly halted play with Kent, bottom of the Second Division of England’s County Championship, 203 for four.

But when the match resumed they lost four wickets for 30 runs in slumping to 233 for eight.

Australia-born but England qualified Mitchell Claydon entertained another good crowd with a 25-ball fifty that included two soaring straight sixes off Smith before falling to Ahmed.

Smith, who scored a century in Australia’s second innings, ended the match when he dismissed last man Ivan Thomas for a duck.

Australia have one more four-day match, against Essex in Chelmsford starting on Wednesday, before they begin the defence of the Ashes, with the first Test in Cardiff on July 8.