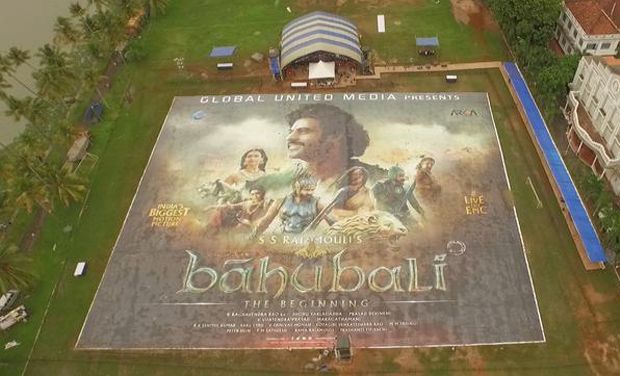 Bahubali, which has managed to stun everyone till now, is all set to mark its debut as Bollywoodâ€™s most expensive movie so far. From silver screen stars to a common man, everyone is going gaga over it.

The team of Baahubali held an event in Cochin and Kerala recently, where they unveiled the record breaking poster amidst a huge crowd and the team of.

Plotting of the film

There was nothing simple about the 42-year-old filmmaker’s ambitions for the project, however, with one battle scene taking four months to shoot. It constitutes about 20 minutes of the film.

Some 600 artists from 17 visual effects studios across India, South Korea and China have been involved in creating the film’s 4,500 visual effects and computer graphics.

The budget, however, is far off those in Hollywood, where a blockbuster often costs more than $200 million to make, and a single film can rake in more than a billion dollars.

Bahubali, an epic battle movie has been compared to American blockbuster 300. The flick is being planned with an estimated budget of Rs 160 crore of which Rs 40 crore will be spent on special effects and digital imagery.

The National award winning director is leaving no stone unturned to make his magnum opus a grand one!

Baahubali, which has been three years in the making, stars Indian actor Prabhas, who generally goes by one name, Rana Daggubati and actresses Tamannaah Bhatia and Anushka Shetty. The cast also includes Ramya Krishnan, Sathyaraj and Nassar.

The film is shot mostly in Hyderabad where Telugu film industry is based. The film will be dubbed into Hindi and the producers are also considering releasing a shorter version for international audiences.

Made on a magnificent scale, Baahubali is the first ever Indian film that transcends regional boundaries and has a pan-India appeal.

Presented by Karan Johar, Baahubali is set to hit the theatres onÂ July 10.