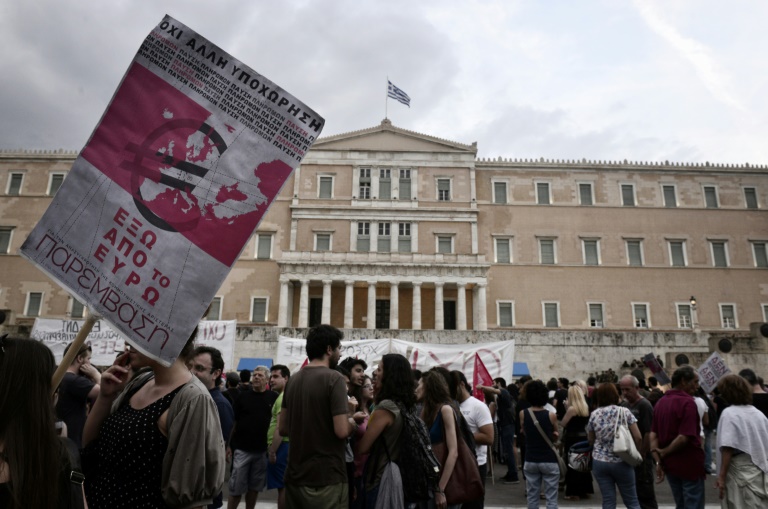 Asian equities tumbled Monday on expectations of a Greek eurozone exit after Athens announced a referendum on creditors’ proposals, while Chinese stocks gyrated wildly after losing some 20 percent in the past two weeks.

Shanghai saw a 10 percent swing from gains to losses, extending a painful sell-off since hitting a June 12 peak, with a weekend central bank interest rate cut unable to offset profit-taking and a tightening of trading rules.

Hong Kong tumbled 3.63 percent at one point before sitting 2.55 percent lower in the afternoon.

Chinaâ€™s strict capital controls and limits on foreign investment mean its stock market is largely detached from other major bourses, and its recent ascent has been driven by domestic policy factors.

Greek Prime Minister Alexis Tsipras stunned world markets at the weekend when he announced the national poll for July 5 in which voters will be asked to decide on creditors’ reform proposals, as five months of talks failed to find common ground.

The EU and IMF responded by rejecting a request to extend Greece’s bailout beyond its June 30 expiry date, meaning it will default on a key payment and possibly crash out of the eurozone.

Tsipras has now imposed capital controls throughout the country to avoid flight of cash, with banks closed until July 6 and ATM withdrawals limited to 60 euros a day.

Speaking on national television on Sunday, Tsipras said the Bank of Greece had recommended a “bank holiday and restriction of bank withdrawals” after the European Central Bank said it would not increase its financial support to Greek lenders, despite early signs of a bank run.

European equity markets sank in early trade Monday, with London tumbling 2.2 percent and Paris down 4.7 percent, while borrowing rates for Italy and Spain soared. The Athens stock market is closed until July 7.

The dollar was at 122.86 yen against 123.89 yen in US trade, with investors rushing to safer investments.

“In the face of pressure from the eurozone to accept austerity measures, the Greeks answered that it’s hard to live just on water,” Mitsuo Shimizu, deputy general manager at Japan Asia Securities Group Ltd in Tokyo, told Bloomberg News.

“Carrying out a referendum buys the Greek side some time. Digesting the worst-possible scenario of a Greek default, global stock markets could fall 1 to 2 percent today.”

Chinese traders were swinging from black to red after Saturday’s move by the People’s Bank of China to cut rates and lower the amount of cash lenders must keep in reserve.

Analysts said the announcement was in response to dramatic stock market falls over the previous two weeks, coming after the main index soared more than 150 percent over the past 12 months.

Shanghai dived more than seven percent Friday — and 18.8 percent in the two weeks from peaking on June 12 — as authorities tightened rules on margin trading, while dealers are also worried about stocks’ high valuations.

Shenzhen sank more than 20 percent in the two weeks to Friday.

“The cut of interest rate and reserve requirement in the weekend is the main factor that affects the stock market today,” Zhang Yanbing, an analyst from Zheshang Securities, told AFP.

“The policy is a good one, but the prospect is still not certain yet. Some investors that bore losses last week may also start to sell. So the trend may still be a bit volatile. We need to wait and see.”

Oil prices were lower. US benchmark West Texas Intermediate for August delivery fell 94 cents to $58.69 while Brent crude for August eased 88 cents to $62.38 in afternoon trade.