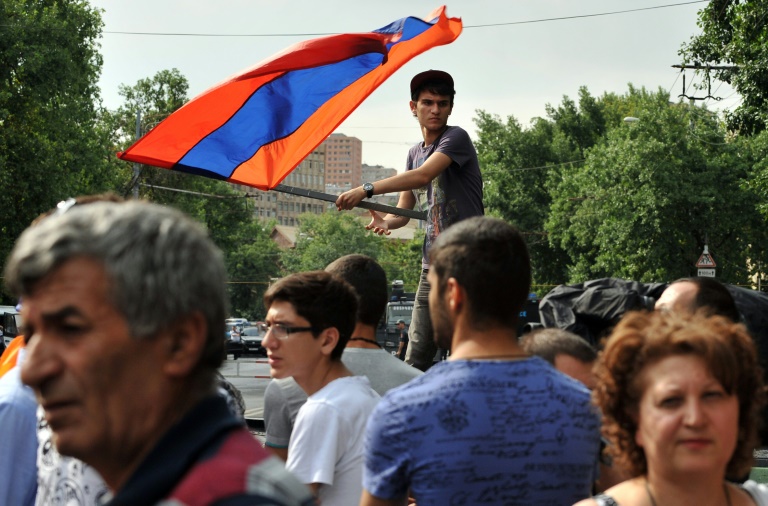 Some 10,000 protesters rallied in the Armenian capital on Sunday, defying police threats to forcefully break up the demonstration against the government’s controversial move to hike electricity prices.

Protesters, who for a second week blocked the capital Yerevan’s main thoroughfare, refused to disperse despite a police ultimatum and President Serzh Sarkisian’s promise that the government would shoulder the burden of a controversial 16-percent hike in electricity prices.

Late in the evening, some 2,000 protesters opted to move to nearby Liberty Square to avoid confrontation with the police, but 8,000 vowed to stay on Bagramyan Avenue.

Senior police officer Valery Osipyan told reporters that “if people do not accept the proposal to restore public order on Bagramyan Avenue by 11 pm, then it will be us who will restore it.”

He said many residents had complained about the noise and rubbish on the streets, also claiming that there were “armed provocateurs” among the protesters.

Chanting “Armenia! Armenia!” and “No to robbery,” protesters vowed to keep pressurising the government until their demands were fully met.

“We will stay until we win. We don’t believe in the president’s bluff,” one of the protesters, 21-year-old student Hrayr Gevorkyan, told AFP.

“We will continue our fight. We don’t trust in our authorities,” another protester, pensioner Asya Gasparyan, said.

In a failed attempt to appease protesters, Sarkisian announced on Saturday that the government would temporarily “bear the burden” of the higher rates pending an audit on “how justified the tariff raise is and what its consequences would be for the country’s economy.”

He said the government would go ahead with the tariff hike but would temporarily cover the costs of the increase.

Protesters dismissed the president’s announcement as inadequate and repeated demands for the price increase to be scrapped altogether.

The United States embassy in Armenia urged Sunday the authorities and protesters to show restraint.

Anger has long simmered in Armenia over the government’s failure to lift the Caucasus nation of 3.2 million out of poverty but the decision to raise household electricity prices from August proved the last straw.

Armenia’s cash-strapped power distribution company said the hike was needed due to a sharp devaluation of the national currency, the dram.

The company is owned by the Russian state holding Inter RAO, which is controlled by one of Russian President Vladimir Putin’s closest allies, Igor Sechin.

The protests started on Friday and gained momentum after hundreds of riot police moved in early Tuesday to break up a rally using water cannon and attacked journalists, in the most serious confrontation between protesters and police in years.

Washington, Brussels and the OSCE pan-European security body have all expressed concern over police violence.

Armenia, an ally of Moscow, has been hit hard by the economic crisis in Russia brought on by falling oil prices and Western sanctions over Ukraine.

Exports to Russia — Armenia’s foremost trading partner — have fallen, as have remittances from Armenians working there, an important source of income for many families.

The ex-Soviet country is economically isolated as its borders with Turkey and Azerbaijan are blocked due to ongoing international disputes.