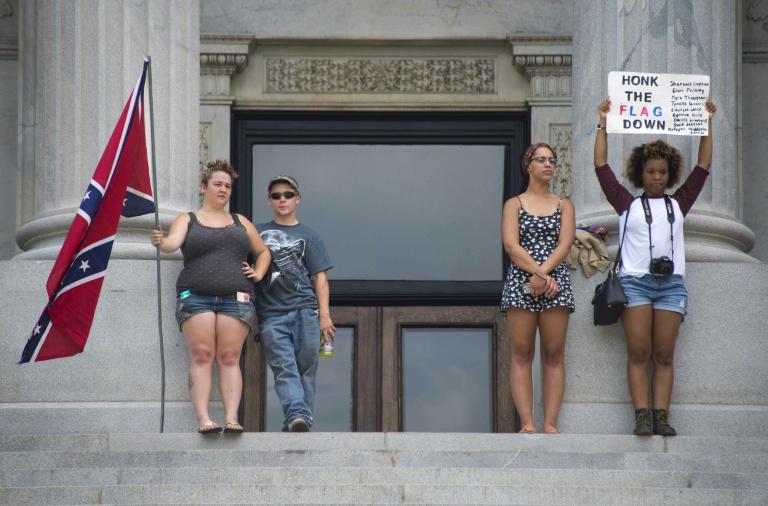 A protester scaled a flagpole on the grounds of the South Carolina legislature at dawn Saturday and removed the Confederate flag, officials said, amid fierce debate about the racially charged symbol.

The black woman climber was arrested as soon as she came down from the 30 foot (nine meter) pole, and a new flag was restored to the original position with an hour.

Pictures on social media showed a woman, named as Bree Newsome, 30, being escorted by an officer, her hands behind her back. #FreeBree was trending on Twitter within hours.

Also arrested was a 30-year-old white man named as James Ian Tyson. Both are from neighboring North Carolina and have been charged with defacing a monument.

“A BPS officer was on routine patrol and had just made rounds when he was notified by other officers monitoring the flag that a woman was climbing the flagpole where the Confederate flag flies on the north side of the state house,” said a statement from South Carolina Department of Public Safety. BPS means Bureau of Protective Services.

“He returned to the flagpole and asked the woman, who was wearing climbing gear, to get off the flagpole.

“She refused to come down until she unhooked the flag. The BPS officer arrested her and another man who was inside the wrought iron fence assisting her.”

Within hours of the incident, an online crowdfunding site had raised more than $80,000 to pay for Newsome’s bail and to help other activists “taking direct action in the movement for Black lives.”

There has been a growing clamor for the flag — branded “a reminder of systemic oppression and racial subjugation” by President Barack Obama on Friday — to be removed from the grounds of the state house in Columbia.

Once flown by the rebel army of the slave-owning South, the confederate flag is seen by some as a symbol of regional heritage. But many more view it as an ugly reminder of racism’s cruel legacy.

Impassioned debate about the flag was sparked by the mass shooting of nine black worshippers last week in Charleston, also in South Carolina.

Newsome, an activist whose full name is Brittany Ann Byuarim Newsome, said in a statement: “We removed the flag today because we can’t wait any longer.

“We can’t continue like this another day. It’s time for a new chapter where we are sincere about dismantling white supremacy and building toward true racial justice and equality,” added the statement, carried in the local The Post and Courier newspaper.

Her protest came ahead of a small demonstration by pro-Confederate flag supporters who chanted and waved the banner at the state house. Several opponents remonstrated with them and held placards demanding the flag be taken down.

In the wake of the Charleston attack, many government bodies and private firms have moved to take the flag from view, and several politicians have spoken out against its use. Several major retailers have stopped selling flag merchandise.

As well as stirring debate about America’s racial divide, the Charleston massacre also fed the frustration felt by many at the country’s failure to control its gun culture.