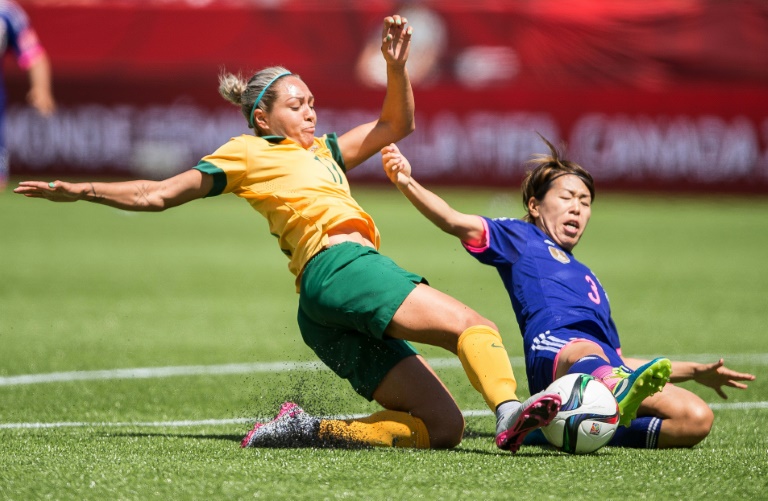 A late goal from substitute Mana Iwabuchi put holders Japan into the semi-finals of the Women’s World Cup on Saturday with a 1-0 win over Australia.

Iwabuchi, 22, got the breakthrough after 87 minutes in a tense quarter-final dominated by Japan in scorching temperatures of 31 degrees celsius in Edmonton.

It put the 2011 champions through to the last four along with Germany and the United States, as they bid to join the world’s top two teams as two-time winners.

“As the Australian players were tired I said to Mana when I sent her in: ‘you are going to decide it’,” explained coach Norio Sasaki, joking the forward’s first name sounds like Mada in Japanese which means ‘not yet, not yet’.

The Asian champions next play either hosts Canada or England, who play their quarter-final later Saturday, in Wednesday’s semi-final in Edmonton.

“The emotion that we created in 2011 we certainly would like to be able to recreate that for the Japanese people,” said Sasaki.

Australia coach Alen Stacjic said it had been hard for his young side.

“They have already won a World Cup and Asian Cup, silver at the Olympics, you can tell, their chemistry’s fantastic, they’re technically superb.”

The Japanese were dangerous early but had little to show for their efforts during the first 20 minutes in the Commonwealth Stadium.

Forward Shinobu Ohno threatened for the ‘Nadeshiko’ but hit over the crossbar, and soon after sent just wide.

Just before the break Australia had a chance to break the deadlock only for Kyah Simon’s long range effort to go straight into the hands of Ayumi Kahori in goal.

Australia allowed their best chance go abegging when a Mizuho Sakaguchi error on 54 minutes let Sam Kerr through but her tame effort went straight at Kahori.

Japan continued to look dangerous but Miyama and Yuki Ogmi both missed in front of goal.

Sasaki brought on Iwabuchi for Ohno after 72 minutes and she finally got the winner from close range off a corner after Azusa Iwashimizu’s shot had been blocked.

“Even though it took us a long time to score, our patient playing resulted in this win and has given us confidence for our next game,” said Sasaki.

Said Stajcic, “Certainly the better team won. It’s a heartbreaking experience for all of us.

“Even though they scored off a scrappy goal and a set piece in the 88th minute they were probably better at more aspects of the game than we were.

“We expelled a lot of energy defending in that first 20 minute period. They were a lot more composed throughout the 90 minutes.”

It was a fifth win in as many games in Canada for the fourth-ranked Japanese, who beat Australia 1-0 in the Asian Cup final last year.

The Matildas, at 10th, the lowest ranked team left in the tournament, go home after getting past the knockout rounds for the first time in their history by beating Brazil 1-0 in the last 16.