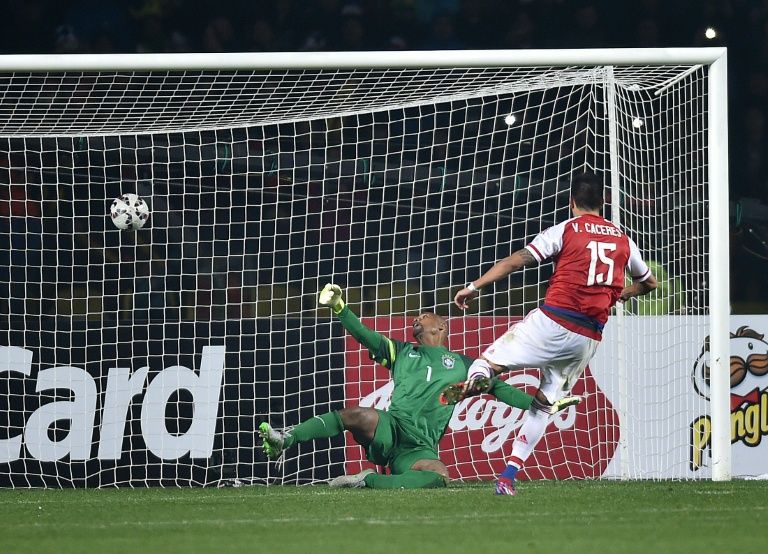 Brazil’s penalty shoot-out jinx struck again as Paraguay sent them crashing out of the Copa America in a stunning repeat of their 2011 upset of the five-time world champions.

Striker Derlis Gonzalez was the hero for Paraguay, slotting a second-half penalty to level the match at 1-1 before then stepping up to rifle home the decisive spotkick to clinch a 4-3 win in the shoot-out.

It marked another bitter defeat for Brazil, who went out to Paraguay at the same stage of the competition four years ago, when they also lost on penalties.

Brazil’s hopes of avenging that loss soon unraveled in the shoot-out, when terrible misses by Everton Ribeiro and Douglas Costa handed the initiative to the Paraguayans.

Paraguay skipper Roque Santa Cruz gave his team nervous moments when he squandered the opportunity to clinch victory with his side’s fourth spot-kick, blazing high over the bar.

But Gonzalez, 21, who had buried an emphatic 72nd-minute penalty to level the game, made no mistake with his side’s fifth kick before being mobbed by delirious team-mates.

“To see my team-mates with tears in their eyes, you can’t put a price on that,” Gonzalez said.

“Nobody trusted in us when we arrived here. But we’re a very united team and we have more to give in this tournament.”

Paraguay will now play Argentina in the semi-finals on Tuesday, a rematch of their first round game which finished 2-2.

It was a disastrous end to a miserable tournament for Brazil, who had arrived in Chile desperate to atone for their humiliating exit at last year’s World Cup, when they were thrashed 7-1 by Germany in the semi-finals.

Brazil coach Dunga attempted to put a positive spin on his team’s elimination, insisting it would benefit the squad as they prepared for the 2018 World Cup.

“It is preparation, a good experience,” Dunga said.

“We would like to win but it is a great lesson, learning for the highest purpose of the tie as we look at the World Cup in 2018.”

Brazil had looked on course for a place in the last four after dominating the first half, and took the lead on 15 minutes through Robinho.

A sweeping counter-attack ended with the ball transferred to Dani Alves on the right, who once again whipped in a perfect cross and Robinho was on hand to tuck away a close-range finish for his 28th international goal.

Paraguay struggled to contain Brazil for much of the half and regularly incurred the wrath of Uruguayan referee Andres Cunha, who produced yellow cards for Bruno Valdez and Pablo Aguilar in the opening 45 minutes.

Yet having been largely outplayed in the first half, Paraguay threw caution to the wind after the break and soon had Brazil creaking in defence.

Gonzalez forced a save from Jefferson at the near post with a rasping free-kick after 50 minutes, and the Brazil goalkeeper was again pressed into action in the 61st minute, diving to parry away Paulo Da Silva’s header.

The Paraguay pressure reaped its reward on 70 minutes when a cross into the Brazilian area ended with a penalty.

Brazil defenders Thiago Silva and Dani Alves both jumped for the same ball and when Silva was adjudged to have handled, Cunha pointed to the spot.

Gonzalez, the FC Basel striker, showed composure that belied his years to bury the ensuing penalty into the side-netting beyond Jefferson.

With Brazil powerless to wrest back the initiative the match went to penalties, and Gonzalez held his nerve once more to put the 2011 runners-up into the last four.