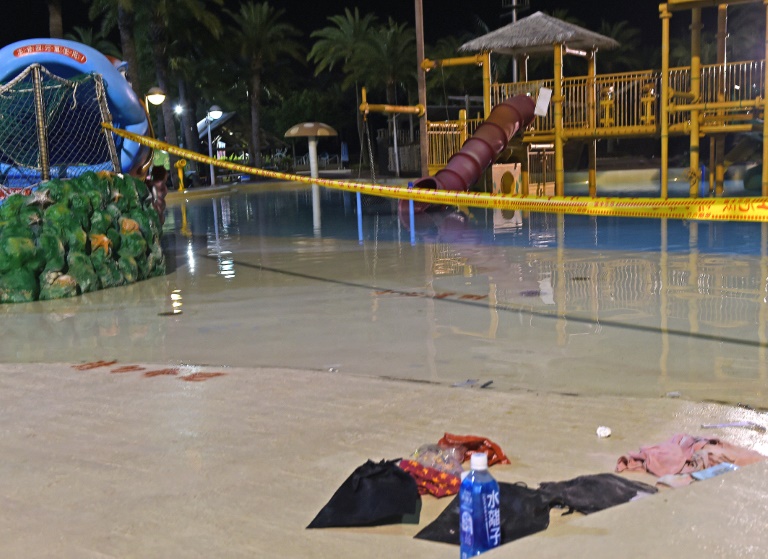 More than 200 people were injured, over 90 of them seriously, in an explosion at a water park outside Taiwan’s capital Taipei Saturday after coloured powder being sprayed onto a crowd ignited, officials said.

Footage on the Apple Daily newspaper website showed crowds dancing as music played and clouds of powder being sprayed out which suddenly turned into a ball of fire that tore through the spectators.

Terrified partygoers were then shown running for their lives, screaming, as they were overtaken by flames.

As ambulance crews struggled to reach the site, victims were carried away on rubber rings and inflatable dinghies as friends desperately tried to get them out.

Bystanders poured bottles of water on the scorched skin of the victims still at the scene.

Around 1,000 spectators had been at the Color Play Asia event at the Formosa Fun Coast waterpark, just outside the capital Taipei, according to officials.

One male witness told local news channel CTI: “It started on the left side of the stage. At the beginning I thought it was part of the special effects of the party but then I realised there was something wrong and people started screaming and running.”

Authorities said 229 had been hospitalised with 97 seriously hurt.

Media reports said some victims had suffered burns to more than 40 percent of their bodies.

A doctor treating 41 victims at one hospital in Taipei said 17 of them were “seriously burned”.

“They all had respiratory system damage,” he said.

“Our initial understanding is this explosion and fire… was caused by the powder spray. It could have been due to the heat of the lights on the stage,” said a spokesman for the New Taipei City fire department.

A man responsible for the event had been detained by police for investigation, the spokesman said.

Prosecutors were also looking into the incident, local media reported.

Television images showed the stage on fire and crowds running away, some of them only dressed in swimwear and covered in coloured powder.

Trails of bloody footprints leading away from the stage remained in the aftermath of the inferno, an AFP reporter at the scene said.

The fire was quickly extinguished, according to authorities.

Officials said that ambulances had found it difficult to get near to the site and had to send in emergency workers with stretchers.

“We feel sad and regretful about the accident,” said New Taipei Mayor Eric Chu who was reported as saying it was the municipality’s worst ever incident of mass injury.

He said that extra doctors had been called in to help treat the victims.

“I’ve ordered the park to shut down immediately and be placed under a rigorous investigation,” Chu added.