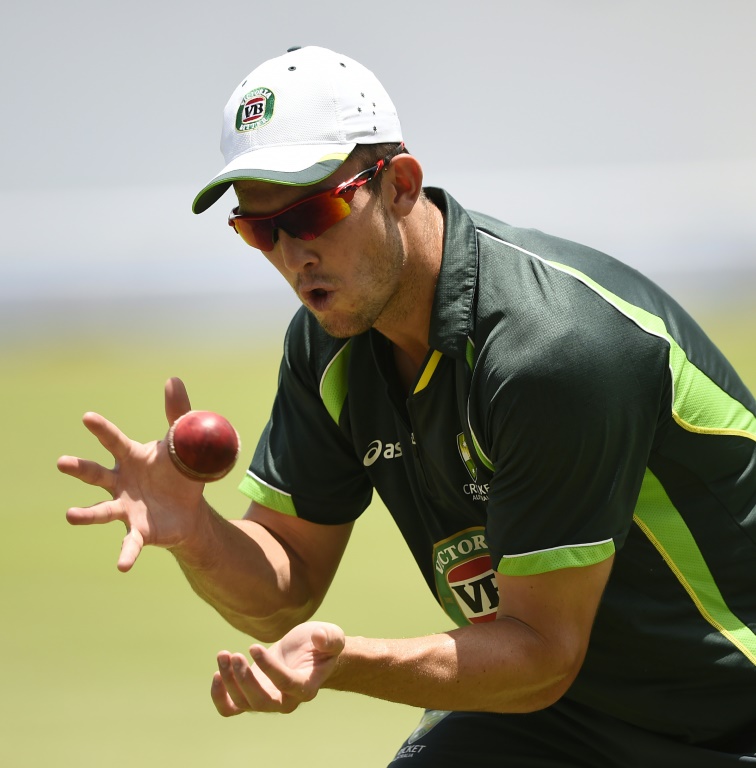 Mitchell Marsh outshone Shane Watson as the two all-rounders vied for an Ashes place during Australia’s tour opener against Kent at Canterbury on Saturday.

Australia, in their second innings, were 322 for four at stumps on the third day of four — a huge lead of 549 runs after skipper Michael Clarke opted against enforcing the follow-on.

Brad Haddin was 11 not out and Mitchell Johnson 27 not out at stumps.

Marsh, whose older brother Shaun made a century in the first innings, eventually retired on 101 after delighting a near capacity crowd of more than 5,500 with a blizzard of boundaries in what was just the 23-year-old’s third first-class hundred.

Watson, by contrast, subsequently holed out for 81 when a century seemed his for the taking.

Both players appear to be competing for the one place on offer to a seam-bowling all-rounder in the side for the first Ashes Test against England on July 8.

However, Watson was unable to bowl this match due to what an Australia spokesman said were “sore points”, without elaborating further.

At tea, Watson was 27 not out and Marsh, who has played just four Tests, eight not out.

Marsh, who’d earlier on Saturday taken one for 35 in 11 overs during Kent’s first innings, accelerated in dramatic fashion.

On a sun-drenched day, Marsh pulled left-arm seamer Adam Ball for six before reaching 99 with a soaring straight six against off-spinner Adam Riley.

Two balls later, a single off Riley saw Marsh to a 93-ball hundred.

Remarkably, Marsh struck 77 runs to complete his century in the same time Watson added five to his total.

After another single next ball, also off Riley, Marsh walked off to give Haddin some more time in the middle.

Watson fell short of a century when he holed out off Riley, having faced 76 balls, with 12 fours and a six.

His exit gave Riley (three for 114) a third wicket after he’d dismissed Chris Rogers for 45, the opener slicing an intended drive to point.

“The boys couldn’t stop commenting on how hard he was hitting the ball.

“There’s two all-rounders (Marsh and Watson) that are pushing for spots and we saw them both bat beautifully.

“Going into a big series you want (players) performing and that’s what everyone is doing, so it’s fantastic to see.”

Earlier, Kent were dismissed for 280 in reply to Australia’s first innings 507 for eight declared — a deficit of 227 runs.

Left-arm fast bowler Johnson, who took three wickets on Friday, finished with figures of four for 56 in 18 lively overs.

Clarke then opted for more batting practice, promoting himself to open the tourists’ second innings alongside Rogers.

The pair were largely untroubled during a first-wicket stand of 91 before both fell to Riley.

Rogers went first before Clarke, in sight of his second fifty in this match, lofted Riley straight to Ben Harmison, younger brother of former Ashes-winner Stephen, at long-on.

The Aussie skipper’s 47 came off 60 balls, including eight fours.

Kent, bottom of the Second Division of the County Championship, resumed Saturday on 203 for five.

Harris, bidding to force his way into the Test side, struck the first blow Saturday when he had Sam Billings caught behind without adding to his overnight 24.

Ball took the attack to Australia, but on 45, he hooked Harris (two for 51) to Peter Siddle at deep square leg.

Tailenders Matt Hunn (18 not out) and Ivan Thomas (13) hung in for a while before the latter was caught at mid-on off leg-spinner Fawad Ahmed to end the innings.