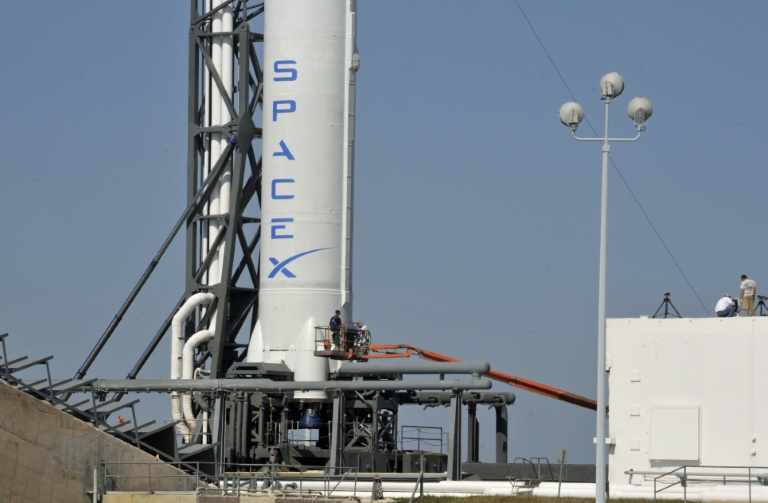 Worms, lettuce and a massive parking station for future spaceships are aboard SpaceX’s unmanned Dragon cargo capsule, poised for a Sunday launch.

The blast-off of the white, gumdrop-shaped spaceship atop the California-based company’s Falcon 9 rocket is set for 10:21 am (1421 GMT) from Cape Canaveral, Florida.

Shortly after launch, SpaceX will make a third attempt to land its rocket on an ocean platform. This is part of CEO Elon Musk’s vision of revamping the rocket industry by making expensive rocket parts re-usable instead of discarding them in the ocean as happens now.

Moments after launch, as the Dragon heads for orbit, the tall section of the rocket will ignite its engines and guide itself back to a floating barge in the Atlantic for an upright landing.

SpaceX’s first try in January ended in failure. The rocket collided with the drone ship platform, after running out of the hydraulic fluid needed to power its steering fins.

During a second try in April, the 67,000-pound (30,000-kilogram) rocket managed to set itself down on the platform in an upright position, but tipped over and exploded seconds later.

The SpaceX vice president of mission assurance, Hans Koenigsmann, said company experts have learned from past attempts, but it would be hard to predict the chances of success on Sunday.

“You look at the data, you evaluate this and then you make a correction and that is ultimately how you succeed,” he told reporters on Friday.

The Dragon spacecraft will deliver 4,000 pounds (1,800 kilograms) of food, supplies and science experiments to the International Space Station, where two Russian cosmonauts and one American astronaut are living.

SpaceX is now the only American company capable of sending cargo to space. Orbital Sciences’ program is on hold, after one of its rockets exploded on the launchpad last year and destroyed its fully loaded Cygnus cargo carrier.

Russia’s supply program also suffered a setback in April when it lost control of its Progress cargo ship and the unmanned capsule burned up on re-entry to Earth’s atmosphere a couple of weeks later.

The Dragon’s cargo includes the first of two International Docking Adaptors, which are essentially parking spots that are meant to make it easier for a variety of commercial supply ships to latch onto the orbiting lab in years to come.

Two experiments among the dozens on board aim to help astronauts cultivate their own food in space, a skill that would be key to sustaining a crew during a deep space mission to Mars.

One experiment is a type of greenhouse that will enable astronauts to grow lettuce in space.

Astronauts have previously grown red romaine lettuce, which was tested back on Earth for signs of dangerous space bugs, said ISS program scientist Julie Robinson. No dangers were found, she said.

This time, astronauts may get to sample the Tokyo Bekana cabbage — a bitter leafy green — that they grow.

“We don’t have all the paperwork in place yet but we are quite hopeful that the crew will actually get to eat this cabbage after they grow it,” Robinson told reporters.

“We are getting closer to that first bite of space lettuce.”

Another experiment devised by middle schoolers in Colorado aims to see how 11 worms fare in a compost box in space.

Before launch, the worms will be frozen, allowing them to hibernate for Sunday’s flight, before being reanimated when they return to room temperature at the ISS.

The aim of the experiment is to see how the red wiggler worms compost a soil combination of eggshells, coffee grounds and newspaper while in orbit.