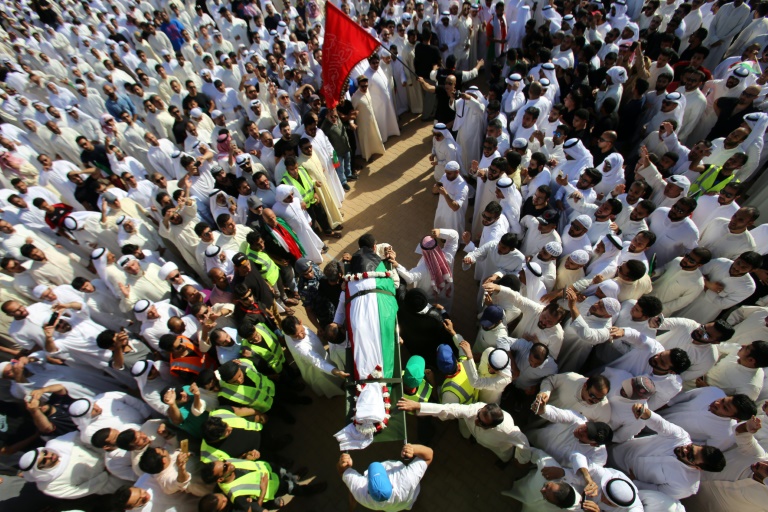 Thousands of Kuwaitis braved scorching summer heat on Saturday to attend the funerals of 18 out of 26 victims of a Shiite mosque bombing claimed by the Islamic State group.

Draped in Kuwaiti flags, the bodies were borne by mourners chanting religious slogans.

Mourners turned out in large numbers despite the Ramadan daylight fast and as temperatures hit 45 degrees Celsius (113 Fahrenheit).

“This crowd is the proof that the objectives of the criminal act have failed,” parliament speaker Marzouk al-Ghanem told reporters.

The interior ministry said in a statement that 26 people and the IS suicide bomber were killed and 227 wounded in one of the country’s worst bombings and its first ever on a mosque.

The health ministry said that 40 wounded are still in hospital.

Two of the dead were Iranian, the Shiite-dominated Islamic republic’s foreign ministry said.

In Iraq, relatives wept as the eight coffins arrived and were taken inside the airport terminal at Najaf, an AFP journalist said.

“We want to deliver a message to Daesh (an Arabic acronym for IS) that we are united brothers among the Sunnis and Shiites, and they cannot divide us,” Abdulfatah al-Mutawwia, a Kuwaiti who lost his brother in the bombing, said in Iraq.

Mosque official Abdulnabi Mansur said the victims flown to Iraq were seven Kuwaitis and a Saudi, and that they would be buried in the Wadi al-Salam cemetery surrounding the shrine of Imam Ali in Najaf.

In Kuwait, condolences were being accepted for three days from Saturday at the Grand Mosque, the largest place of worship for Sunni Muslims, in a show of solidarity.

An interior ministry statement said the owner of the car the bomber used to get to the mosque has been arrested, and that the driver was also being sought.

The ministry said, without elaborating, that an unspecified number of suspects were held for questioning in connection with the attack.

The government briefed MPs about measures it has taken since the bombing, Sheikh Mohammad told reporters.

Kuwait’s emir, the government, parliament and political groups and clerics have all said the attack aimed to stir up sectarian strife in the emirate.

Sunni religious and political groups were quick to condemn the attack which was claimed by IS, a radical Sunni group which considers Shiites to be heretics.

The cabinet announced after an emergency meeting on Friday that all security agencies and police had been put on alert to confront what it called “black terror”.

Justice and Islamic Affairs Minister Yacoub al-Sane said additional security measures will be taken around mosques and places of worship.

Saturday was a day of mourning in Kuwait.

The emir, Sheikh Sabah al-Ahmad al-Sabah, who visited the site immediately after the bombing, said the “criminal attack is a desperate and evil attempt targeting Kuwait’s national unity”.

Countries and organisations including the United Nations and the United States deplored the bombing.

Eight Islamist, liberal and Shiite political groups condemned the attack in a joint statement and called on the government to confront extremists.

Oil is Kuwait’s main source of income, accounting for around 90 percent of public revenues.

The OPEC member says it sits on around 10 percent of global reserves and pumps around 2.8 million barrels of oil per day.