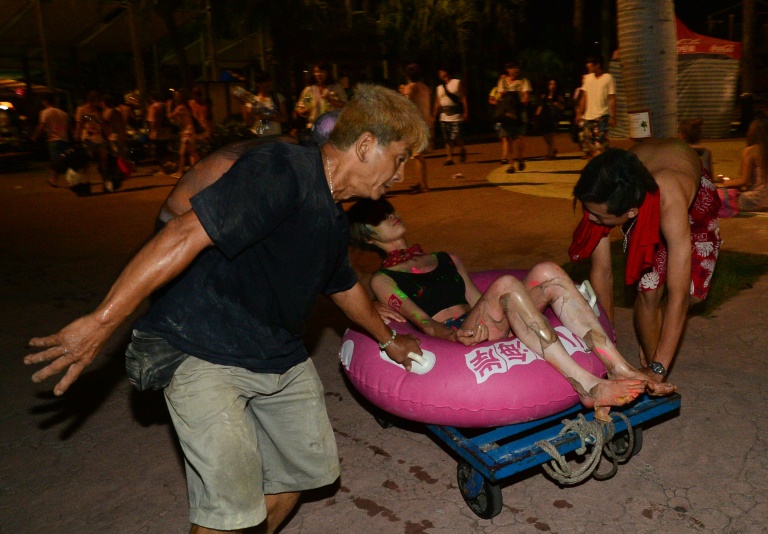 Witnesses described the scene at a Taiwan water park as “hell” after a ball of fire ripped through a crowd, with authorities putting the injured at nearly 500 on Sunday, more than 200 of them seriously hurt.

Horrifying amateur video footage showed crowds of young revellers dancing in front of a stage and cheering as clouds of green and yellow powder covered them at the “colour party” Saturday night.

But their joy turned to terror when the powder suddenly erupted into flames engulfing the partygoers in an inferno as they ran screaming for their lives.

Some were dressed only in swimwear and images from the scene show many with severe burns being tended by those who escaped.

The injury toll from the blast sharply rose Sunday morning as officials began to track down victims who had taken themselves to the hospital or had been ferried there by others.

One male student who sustained minor injuries described the scene as “hell”.

“There was blood everywhere, including in the pool where lots of the injured were soaking themselves for relief from the pain,” he told reporters.

His visibly shaken girlfriend added: “I saw lots of people whose skin was gone.”

Ambulances had struggled to reach the scene, and victims were carried away on rubber rings and inflatable dinghies as friends desperately tried to get them out.

Bystanders poured bottles of water on the scorched skin of the injured. Trails of bloody footprints leading away from the stage remained.

Around 1,000 spectators had been at the Color Play Asia event at the Formosa Fun Coast water park, just outside the capital Taipei, according to officials.

One male witness told local news channel CTI: “It started on the left side of the stage. At the beginning I thought it was part of the special effects of the party but then I realised there was something wrong and people started screaming and running.”

Public Health Department said 498 people had been injured, revising down earlier figures after it emerged that some of the wounded had been counted twice as they were transferred between hospitals.

Officials described 202 of the injured as in serious condition.

The severely wounded are being treated in intensive care units at 37 different hospitals.

“The reason why the burns were so severe was that in addition to burns to the skin, there were also injuries caused by burns to the respiratory organs from the large amount of colour powder inhaled,” Lee Lih-jong, deputy chief of the health bureau of the New Taipei City government, told AFP.

“The next 24 hours will be critical for those severely injured.”

Several major hospitals in Taiwan have been asked to donate skin grafts and surgical equipment to help treat the injured, the Ministry of Health and Welfare said.

One father broke down as he told how his daughter was in intensive care with third degree burns.

“She was attending a music concert… why would there be an explosion?” he said, weeping.

“More than 80 percent of her body has been scorched,” he told reporters.

The man, who was not named, lashed out at authorities saying they had not contacted him or offered any help.

The water park issued a statement Sunday saying it was “deeply saddened” and would cooperate with the ongoing investigation.

General manager Chen Hui-ying told reporters that all partygoers had been insured but did not say to what amount.

“Throwing coloured corn starch around… we had never heard such an activity could be dangerous,” she said.

The health bureau’s Lee said details of the ages of the victims were not yet available, “but all looked very young, in their 20s or even younger”.

The city government said 13 of the injured were foreign nationals.

“Our initial understanding is this explosion and fire… was caused by the powder spray. It could have been due to the heat of the lights on the stage,” said a spokesman for the New Taipei City fire department.

Deputy fire chief Chen Chung-yueh said Sunday the blast may have been caused by “sparks from machinery or lighting equipment”.

They are being questioned by prosecutors on charges of offences against public safety and negligence of duties that caused severe injuries, a police spokesman said.

Lu and a hardware technician named as Chiu Po-ming were released on bail and banned from leaving the country, China’s state news agency, CNA, reported.

Color Play Asia has also run other “colour parties” in Taiwan in the past two years.

Taiwan’s premier Mao Chih-kuo, who visited the injured Sunday, ordered that all such events be banned unless their safety could be assured.