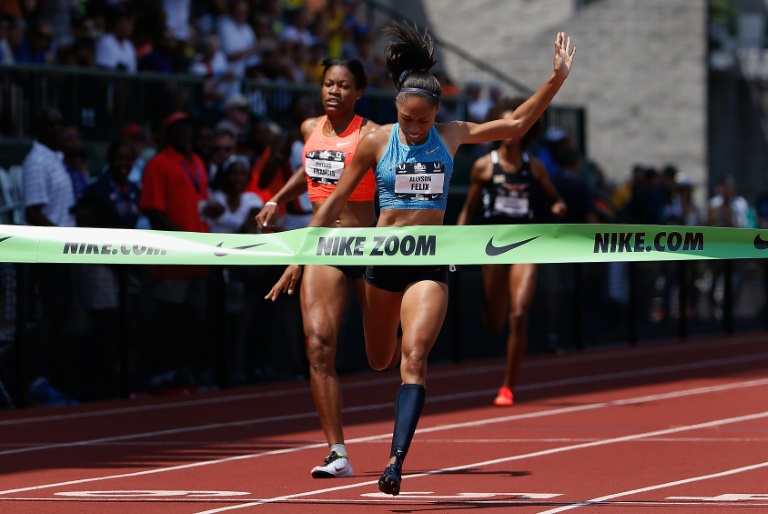 Justin Gatlin stayed on course for a sprint double World Championships challenge, while Allyson Felix has a choice to make after a storming 400m triumph at the US athletics championships.

Gatlin, a polarizing figure who has served two doping bans only to emerge as the dominant sprinter early in the 2015 season, produced a seemingly effortless 19.92sec to cruise into the 200m semi-finals.

Gatlin won his heat ahead of training partner Isiah Young, whose 19.99sec made him the only other sub-20 runner in the heats.

“I felt comfortable,” said Gatlin, who opted out of the 100m won by Tyson Gay on Friday because his 2014 Diamond League title gives him a World Championships wild card in that event.

“Take it easy, rest right now and get ready for the battle tomorrow,” he said of his mindset for the heats, with semi-finals and the final set for Sunday.

With Gay and 100m runner-up Trayvon Bromell sitting out the 200m, Dedric Dukes clocked the third-fastest time of the morning, 20.15, with Terrel Cotton fourth-fastest in 20.16.

Gatlin, who owns the top times in the world this year in the 100m (9.74) and 200m (19.68), has made no bones about his desire to challenge Jamaican superstar Usain Bolt in both at the August 22-30 World Championships in Beijing.

But Felix, the Olympic 200m champion who has a wild card into the Beijing 200m, says the World Championships schedule won’t let her attempt a 200m-400m double as she did in 2011, even though she is now eligible for both.

“I didn’t know I had her, I just knew I wanted to dig deep and leave it all on the track,” Felix said.

With the 200m semi-finals and 400m final at Beijing scheduled just 70 minutes apart, Felix will opt for one or the other, a decision that will ultimately rest with coach Bobby Kersee.

Her own emotions on the matter are mixed.

“I feel like I still haven’t reached my potential there,” she said of the 400. “I feel like I could challenge myself there. But I still love the 200.”

Her decision will be crucial for Francena McCorory, the fastest woman in the world in the event the past two years.

McCorory finished fourth on Saturday in 50.88, and will only be able to race at Worlds if Felix opts out.

“I would hope to get a decision pretty quickly to let the next person know if I decide to go the other way,” Felix said.

Thanks to Merritt’s bye, Vernon Norwood and Bryshon Nellum also punched their tickets to Beijing with their third- and fourth-place finishes.

The top trio will be joined in Beijing by reigning world champion Brianna Rollins, who sat out of the final.

But Jasmin Stowers, who headed the season’s best list before Nelvis’s effort on Friday, missed out, finishing fifth in 12.65.

“I’m a gamer,” 31-year-old Harper-Nelson said of beating the women who had dominated so far this season. “I love to go out there and compete.”

Tianna Bartoletta won the women’s long jump with a world-leading leap of 7.12m.

Bartoletta, the 2005 world champion, improved on the previous season’s best of 6.99 by Canadian Christabel Nettey, and also beat reigning world champion Brittney Reese who settled for second with a leap of 6.97. Janay DeLoach (6.95m) was third.

Bershawn Jackson, the 2005 world champion coming on strong after a 2014 campaign marred by injury, nabbed his fifth 400m hurdles US title to match the record shared by Arky Erwin and Edwin Moses.

The three will be joined by 2014 Diamond League winner Michael Tinsley in the event in Beijing.