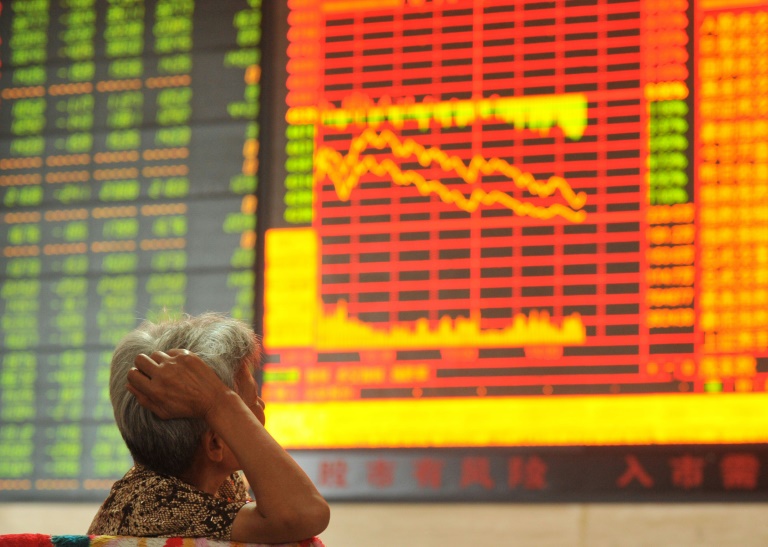 When China’s main share index hit a seven-year high two weeks ago, it topped off a run that had seen it soar more than 150 percent over the previous 12 months, high among the world’s best performers.

But in the two weeks since, it has suffered a huge reversal, plummeting nearly 20 percent and wiping trillions of yuan off market capitalisations.

Analysts are divided on whether the flood of minus signs on price screens signals the end of the spectacular bull market, or is merely a temporary correction in a debt-fuelled upward march.

The tech-heavy Shenzhen Composite, which tracks stocks on China’s second exchange — tumbled 7.9 percent, taking it 20.3 percent down from its peak and putting it into bear market territory.

Analysts say that as well as seeking to stimulate slowing growth, the move was also a response to the market turmoil.

“It allows the PBoC to ease policy to boost the sluggish economy while sending a policy signal that authorities do not want to see a bear equity market, either,” ANZ economists wrote in a research note.

But US investment bank Morgan Stanley has already advised clients to refrain from buying mainland shares.

“This is probably not a dip to buy,” wrote Jonathan Garner, its Hong Kong head of Asia and emerging-market strategy, according to Bloomberg News. “In fact, we think the balance of probabilities is that the top for the cycle… has now taken place.”

Haitong Securities strategist Zhang Qi was more optimistic, telling AFP: “I reckon it is a correction in a bull market. The scale of the correction is quite significant now but the time span is not long enough yet” to signal the end of the bull market.

Rather than a transformation in the world’s second-largest economy or rising corporate profits, the year-long surge in Chinese shares has been driven by liquidity unleashed by Beijing as it looks to bolster growth and accelerated by a wall of borrowed money.

Much of the funds from the government’s stimulus measures have found their way into equities, and with the property market stagnant the rising prices have drawn in millions of new investors, even housewives and retirees, who share tips from friends and on social media.

They often buy and sell on margin, putting up only a small proportion of the trade value and borrowing from a broker for the rest.

It can also create a downward spiral when prices drop if lenders demand investors put in more money to cover their losses — a “margin call” — forcing them to sell.

Authorities have warned against irrational exuberance, with the ruling Communist Party’s mouthpiece the People’s Daily newspaper last month urging investors “not to forget risks in a bull market”.

Analysts say the last fortnight’s falls were triggered by new restrictions on margin trading and accelerated by growing concern about overvaluations.

“Some stocks’ price may look overly high compared with their performance,” said Zhang Yanbing, an analyst with Zheshang Securities.

Investors pull funds from the markets to apply for new issues — there have been 25 in June — and pour it back in when unsuccessful.

But even after the latest falls, the Shanghai index has still more than doubled in a year, and there have been other potholes in its uphill path — in percentage terms, Friday’s drop was only the biggest for five months.

Shanghai Finance University associate professor Qin Huanmei blamed the plunge on “way too fast” previous gains, but added that she believed the government wanted the positive trend to continue.

“The leadership also wants a slow and sustainable bullish market, so this won’t be the end of it,” she told AFP on the sidelines of a financial forum in Shanghai ahead of the interest rate cut.

And ordinary investors do not want to give up on the prospect of profit.

“The overall market may run out of steam but some individual stocks may still have chance despite today’s fall,” Wan Qingyao, a university teacher in her 30s, told AFP.

“I will not clear out my stocks, not while I have lost money on them.”