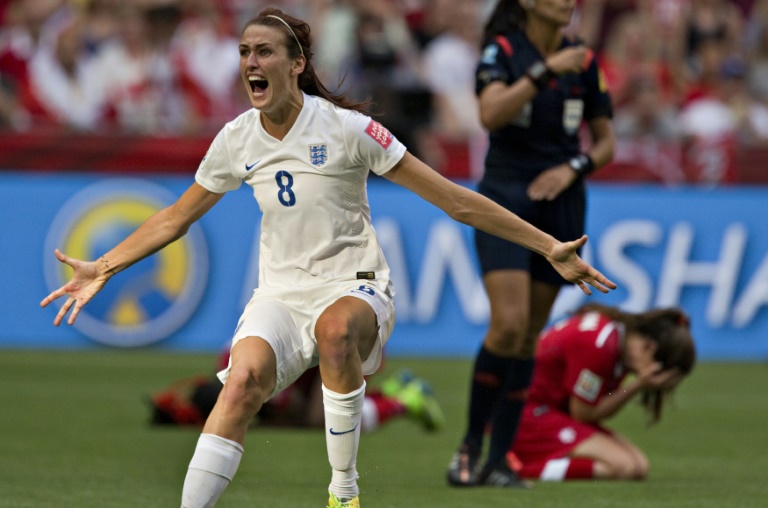 England’s “Lionesses” bared their claws once again as they brutally ended the campaign of hosts Canada 2-1 to advance to their first semi-final at the Women’s World Cup where they meet champions Japan.

Mark Sampson’s revamped squad have now won two knock-out games for the first time in a World Cup, following on from their 2-1 win over former winners Norway in the last 16.

Expectations had been high with women’s football now fully professional in England after significant investment from the Football Association.

And the team have delivered despite starting their campaign with a 1-0 loss to France in rain and windy conditions in Moncton nearly three weeks ago.

The sixth-ranked side bounced back with four straight wins over Mexico, Colombia, Norway and Canada — all by 2-1 scorelines — and are now the lowest-ranked, and the only team never to have won the title, left in the tournament.

“We still had that confidence after that first defeat,” said Sampson, after Saturday’s win built on early goals from Jodie Taylor (11) and Lucy Bronze (14) which shocked a capacity 54,027 crowd in BC Place Stadium.

“I think that was our big moment of the tournament, the way the players bounced back from that defeat.

“So many teams would have struggled with that, doubted themselves, this team stayed strong, stayed together and stuck to the plan and now we find ourselves in a World Cup semi-final.”

“The team know now when we need to dig deep against an excellent Japan team to keep ourselves in this tournament,” he added of their rivals who saw off Australia 1-0 for a fifth straight win in Canada.

The winner of Wednesday’s semi-final will play either Germany or the United States, both two-time winners and the top teams in the world, in the final in Vancouver on July 5.

Sampson, 32, was appointed in December 2013 in place of long-standing coach Hope Powell who lost her job after the team failed to win a single game in Euro 2013.

“We’ve been on a big journey from when Mark took over 18 months ago,” said captain Steph Houghton, named player of the match in Saturday’s game.

Houghton, 27, also cited the 2012 Olympics as a major turning point.

A combined Great Britain team were allowed to compete in the home Games, but they fell 2-0 to Canada in the quarter-finals.

“Everyone mentions the Olympics and how much of a watershed moment that was for women’s football in England, playing at Wembley, getting 70,000 fans to watch us beat Brazil was a massive moment,” said Houghton.

“We’re making history here. We always said we had one aim when we came here: to inspire a nation, and hopefully we’ve done that tonight.”

England were gifted the opener after 11 minutes following a error by defender Lauren Sesselmann who proved to be the weak link in Canada’s back line.

The 31-year-old Sesselmann miskicked the ball and fell over, allowing Taylor to race towards goal and just three minutes later the hosts were in disarray as Bronze headed in a Fara Williams’ free kick.

But captain Christine Sinclair pulled one back three minutes before the break following a blunder by Karen Bardsley in the England goal.

Bardsley had to be replaced early in the second half after suffering an allergic reaction which resulted in her eyes swelling up, with substitute Siobhan Chamberlain getting her first World Cup action.

Sampson said the 30-year-old Manchester City player would have tests to see the cause of the mysterious allergy.

“That moment in the game epitomised what this team’s about,” he said.

“We’ve got two goalkeepers who every day train incredibly hard knowing they wouldn’t get a start, but they waited for that moment and when that moment came Siobhan Chamberlain … she just casually put her gloves on, walked on the field and stopped the ball going in the goal.

“That’s the story of this team so far, everyone played their part when needed,” added Welshman Sampson, who once worked under Everton manager Roberto Martinez at Swansea City.