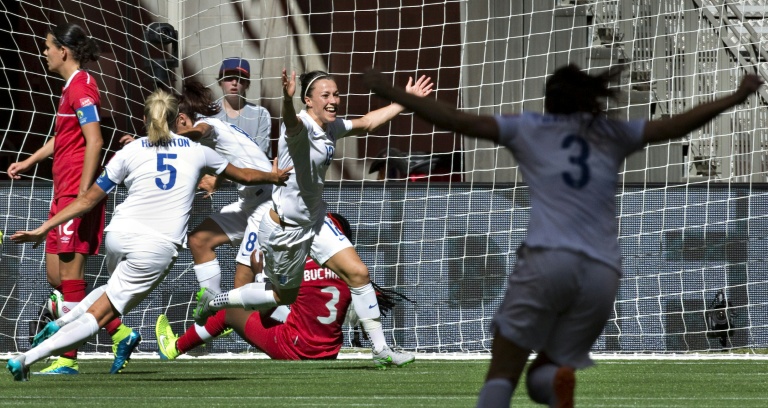 England ended host Canada’s dream at the Women’s World Cup 2-1 to advance to their first semi-finals at the tournament where they meet defending champions Japan, 1-0 winners over Australia.

Early goals from Jodie Taylor and Lucy Bronze dampened the cheers of the capacity 54,027 crowd in BC Place Stadium and kept England on track after losing their opening game of the tournament against France.

England follow on from their first win in a World Cup knockout game against Norway in the last 16.

“They’re history makers again, only the third ever English team to get to a semi-final, we join that ’66 and ’90 club,” said coach Mark Sampson referring to the England men’s team.

“The dream’s over, it’s not how we imagined it to end,” said Canadian counterpart John Herdman.

“We hadn’t written the script to be 2-0 down that early. Gutted, gutted for all of Canada.

“They (England) were hard to break down. They went for it, good on them, they got their tactics right and won the match.”

Earlier Japan outplayed a gritty Australia but needed an 87th minute goal from substitute Mana Iwabuchi to advance in their quarter-final game in Edmonton.

The champions play England in Edmonton on Wednesday as former two-time winners Germany and the United States also play for a place in the final in Ottawa after beating France and China respectively on Friday.

England were gifted the opener after 11 minutes following a howler by defender Lauren Sesselmann who proved to be the weak link in Canada’s back line.

The 31-year-old Sesselmann miskicked the ball and fell over, allowing Taylor to race towards goal past the onrushing Canadian defenders to finish off.

Just three minutes later the hosts were in disarray as Bronze headed in a Fara Williams’ free kick.

But captain Christine Sinclair pulled one back three minutes before the break following a blunder by Karen Bardsley in the England goal.

Ashley Lawrence fired towards the near post, but Bardsley let the ball out of her grasp into the path of Sinclair, Canada’s all time leading goal scorer, who made no mistake firing in her 155th international goal.

“To play under that pressure and come away with a semi-final place in a World Cup, I’m delighted for everyone in England today,” said captain Steph Houghton.

“We’ve been on a big journey since Mark took over 18 months ago it all came down to this game and everyone ran themselves into the ground, there was a lot of pressure on us from the crowd, from the supporters.”

Bardsley was replaced five minutes after the break after she suffered an allergic reaction that left her with swollen eyes and was replaced by Siobhan Chamberlain for the first time in the England goal at the World Cup.

Melissa Tancredi and Sophie Schmidt both missed chances for an equaliser before the final whistle ended the World Cup dream of the Olympic bronze medallists.

The Japanese were dangerous early but had little to show for their efforts during the first 20 minutes in their game at the Commonwealth Stadium.

Forward Shinobu Ohno threatened for the ‘Nadeshiko’ but hit over the crossbar, and soon after sent just wide.

Just before the break Australia had a chance to break the deadlock only for Kyah Simon’s long range effort to go straight into the hands of Ayumi Kahori in goal.

Australia allowed their best chance go abegging when a Mizuho Sakaguchi error on 54 minutes let Sam Kerr through but her tame effort went straight at Kahori.

Sasaki brought on Iwabuchi for Ohno after 72 minutes and she finally got the winner from close range, to condemn Australia to another defeat after losing the Asian Cup final last year by the same scoreline.

“They have already won a World Cup and Asian Cup, silver at the Olympics, you can tell, their chemistry’s fantastic, they’re technically superb,” said Australia coach Alen Stajcic.

The Matildas, ranked 10th, return home after getting past the knockout rounds for the first time in their history by beating Brazil 1-0 in the last 16.