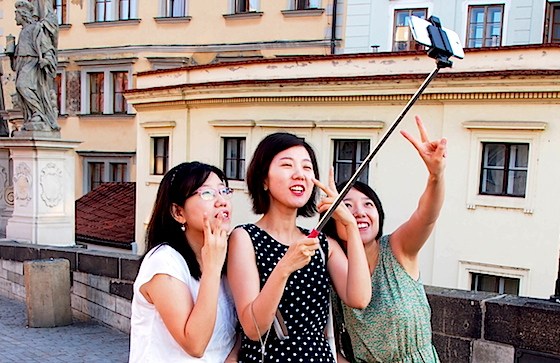 It may be a rage to click selfies at amusement parks but Walt Disney World is in no mood to oblige and has banned selfie-sticks from its theme parks across the world, citing safety concerns.Â

Under a new policy, which takes effect from Tuesday, the poles will not make it past the bag check at any Disney World theme park. The sticks also will not be allowed in Disney World water parks or DisneyQuest, a gaming attraction at Downtown Disney.Â

Selfie-sticks are metal rods that can extend up to about 40 inches, to which smartphones or compact cameras can be fixed. They allow people to take wider-angle pictures of themselves that can include more people and incorporate more background in the shot.Â

“We strive to provide a great experience for the entire family, and unfortunately selfie sticks have become a growing safety concern for both our guests and cast,” Disney World spokeswoman Kim Prunty was quoted as saying by the Orlando Sentinel.Â

The ban kicks in on Tuesday at Walt Disney World in Florida and Disneyland in California, along with other Disney-run theme parks in the US. The ban goes into effect at Disneyland Paris and Hong Kong Disneyland on July 1.Â

Guests will be checked for the equipment during the routine bag check that happens near the parks’ entrances. They will have an option of turning in their selfie-sticks for pick-up later or to go back to their cars or hotel rooms to stow them.Â

Visitors will be told of the policy in locations such as the parking lots and at the resort’s hotels. The prohibition will be added to the park rules post on Disney World’s website.Â

The issue has been building at Disney. Previously, the sticks were prohibited from its rides, and “no selfie-sticks” signs were at select rides.Â

Several incidents preceded the change, but officials have been discussing the rules for some time, Disney said. Last week at Disney California Adventure park, a roller coaster was halted after a passenger pulled out a selfie-stick. The ride was closed for an hour.Â

The All England Lawn Tennis Club (AELTC) in London had earlier also added the devices to the list of items banned from its annual grass court championships — Wimbledon.