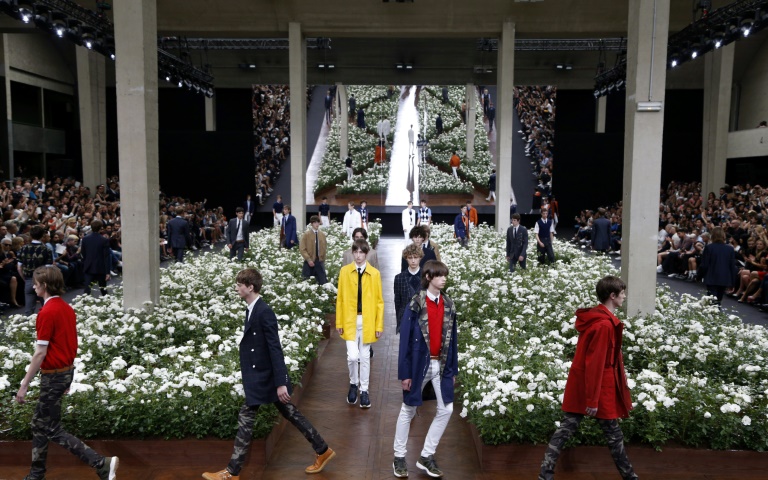 Dior declared summer 2016 the season of “bourgeois cool” at Paris men’s fashion week on Saturday, while Balmain decked out its models as old-fashioned adventurers.

Rousteing, 29, said after the show that “Balmain man” was someone exactly like him: “Someone who is discovering the world, travelling as an adventurer, trying to find new treasures.”

The show was one of the most hotly-awaited events of men’s fashion week, and British Olympic diver Tom Daley and reality TV star Kris Jenner — whose daughter Kim Kardashian is one of Rousteing’s army of celebrity friends — were among the crowds.

Men’s fashion now accounts for 40 percent of Balmain’s sales, but Rousteing justified the decision to sneak a few female models onto the catwalk to show off his new womenswear.

“The womenswear is really close to my menswear,” he said. “For lots of brands, the man and the woman are really different, (whereas for me) it’s the same DNA.”

Dior Homme, meanwhile, went for a blend of traditional elegance and sportswear for its spring/summer 2016 collection, with artistic director Kris Van Assche paying homage to both the bomber jacket and the blazer.

“I tried to redefine a new bourgeois look — one that knows all its parents’ rules, that understands elegance, but mixes these with the rules of the street, with something cooler,” the Belgian designer told AFP.

The bomber jacket, a streetwear staple, got a middle-class makeover in the collection by being embroidered with white roses — Christian Dior’s favourite flowers — while Van Assche drove the culture clash home by mixing camouflage fabric with the diamond-shaped Argyll patterning beloved of golf club members.

Bright orange made plenty of appearances on the catwalk, with Van Assche adding splashes of red, yellow and blue, inspired by the work of American artist Kristin McKirdy.

“I’m not known for my use of colour, and in her work I’ve found a way to embed it, almost a way to infiltrate it,” he said. “We ended up doing a collaboration.”

The results of that collaboration could be seen dangling from the hands of Dior’s models and swinging from their necks, in the form of large pendants using the bright colour scheme.

Two thousand rose bushes were brought into the Paris Tennis Club for the show, where Chanel head designer Karl Lagerfeld was among the guests.