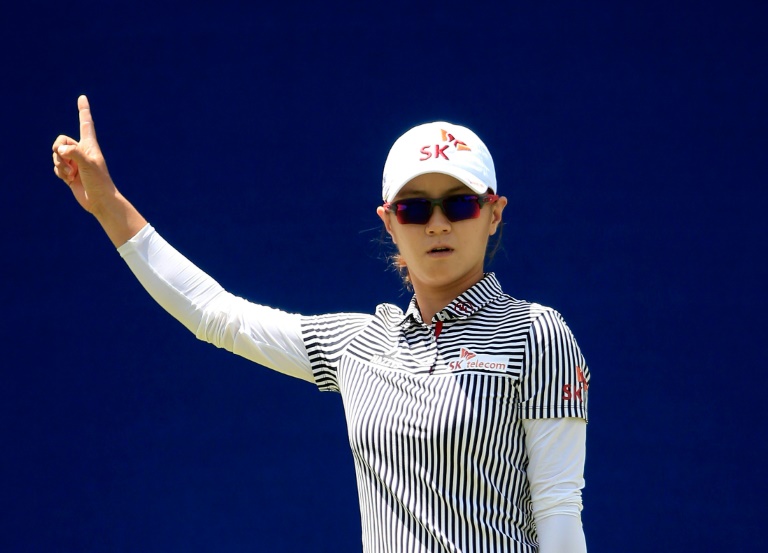 Choi Na-Yeon rolled in a 45-foot eagle putt on 18 to cap an eight-under par 63 for a two-shot lead after the second round of the NW Arkansas Championship on Saturday.

The 27-year-old Choi heads into Sunday’s final round with a slight cushion over South Korean compatriot and first-round leader Hur Mi-Jung and Sweden’s Anna Nordqvist.

Choi finished two rounds at 13-under 129 which broke the tournament’s 36-hole scoring record. She carded seven birdies, an eagle and a bogey on the third hole.

“I feel pretty confident with this tournament,” said Choi, who has won seven times on the LPGA Tour. “I just tried to be more independent out there and after 18 holes I got the score I wanted.”

She also got some help from the wind on number 18 at the Pinnacle Country Club course.

“I got the three wood out then changed to a pitching wedge then back to the three wood because there was a small gap to the right side of the green,” she said of her eagle.

“The wind helped me a lot. I just hit the three wood. I felt good about my swing.”

Choi won the 2012 US Women’s Open and started off 2015 by claiming the Coates Championship.

Hur, who led when the first round was completed earlier Saturday, carded a three-under 68 and was joined in second place at 11-under by ShopRite LPGA Classic winner Nordqvist (66).

Defending champion Stacy Lewis moved into a share of fourth place at nine-under 133 after a second-round 65. She stands alongside Amy Yang (68), Mika Miyazato (67) and Brittany Lincicome (68), who beat Lewis in a playoff at the ANA Inspiration.