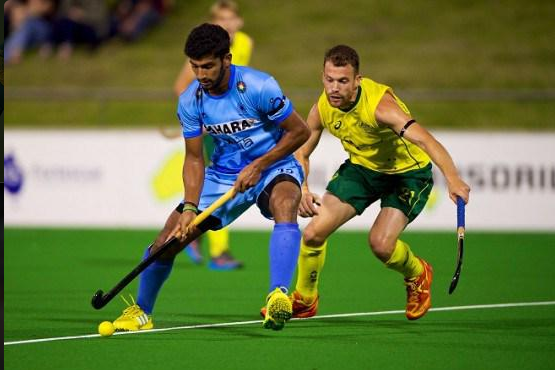 Antwerp:Â India’s defence caved in under pressure as a rampagingAustraliaÂ crushed them 6-2 in the last league fixture of the FIH World League Semifinals, in Antwerp on Sunday.Â

Birender Lakra (34th minute) and Ramandeep Singh (51st) reduced the defeat margin for India in the match, which dominated by the world number one side.Â

PakistanÂ finished third in the group after squandering a penalty stroke and missing chances galore in open play to be held to a 2-2 draw by France.Â

In the closing stages, it was France who were pressing hard for an elusive winner that could have lifted them above Pakistan in the group standings.Â

In the quarterfinals, India seem set to play Malaysia, who lost 1-3 to GreatÂ BritainÂ after leading at half-time. But Group B positions could all change dramatically if Ireland are able to defeat hosts Belgium in the last of the league matches later today.Â

The quarterfinal lineup will only be determined after the Belgium-Ireland encounter later in the evening. Pakistan also had a chance today to go ahead of India had they defeated France by a big margin, and then waited for top-ranked Australia to hand down a sound defeat to India.Â

All those permutations were dashed by France’s fine show this morning.Â

Australia opened the scoring in the eighth minute, capitalising on the slow reaction of the Indian defenders after a foul on top of their circle. The Indian defenders were still to get into positions when Jamie Dwyer saw an opening and sent a crisp square ball to Aran Zalewski, whose flash strike saw Australia off the mark.Â

India first had a look at the Australian goal in the 13th minute when Devindar Walmiki’s fine run took him into the circle from left, but he could not produce a good shot in the crowded goalmouth.Â

A minute later, Dwyer increased the Australian lead when he darted alone into the circle and created space by moving sideways before defeating goalkeeper P.R. Sreejesh with a firm reverse hit into the net.