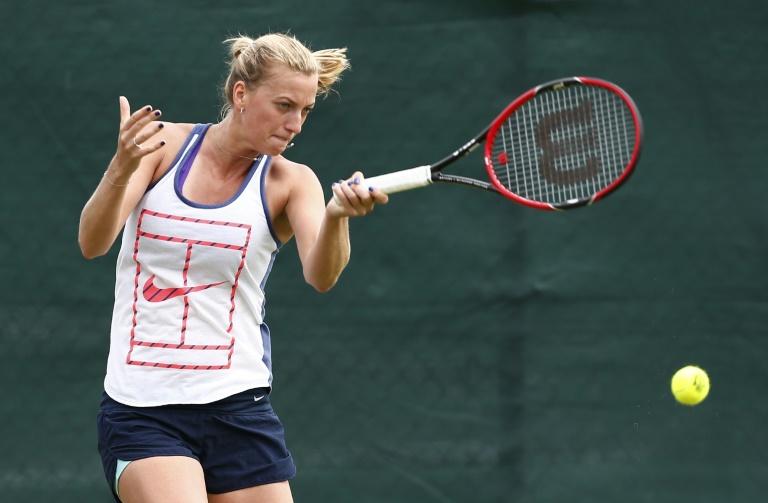 Wimbledon champion Petra Kvitova hopes her return to the All England Club will prove the perfect tonic as she battles to recover from illness.

Kvitova’s Wimbledon preparations were thrown into disarray when the Czech world number two was forced to withdraw from the warm-up event at Eastbourne last week due to a virus.

The two-time Wimbledon winner was confined to her bed for several days and she is still not completely over the bug.

Deprived of valuable match and practice time on grass, Kvitova, who hasn’t played since her French Open fourth round exit on June 1, knows she could be vulnerable to a shock defeat in the early stages at Wimbledon.

But the 25-year-old believes a return to the scene of the greatest moments of her career will provide a much-needed cure to her ailment.

“For sure, it’s really nice to be back. I really missed it all year. I’m glad that I can play here again,” Kvitova told reporters at Wimbledon on Sunday.

“Unfortunately I got sick in Eastbourne. Of course, the preparation, because I was sick, wasn’t perfect.

“I missed a few days of practice, but that’s how it is.

“Every day is better. So I hope on Tuesday I will be 100 percent ready.

“I’ve had these experiences before. I can still be able to compete.

“The pressure, the nerves, are going to be there for sure. It doesn’t matter whether I was sick or not.”

Kvitova’s confidence that she can make a quick transition to grass is understandable given her supremacy on the lawns of south-west London.

Over the last five years, the powerful left-hander has won the title twice, in 2014 and 2011, while also reaching the 2010 semi-finals and twice making the last eight.

In contrast, Kvitova has never gone beyond the semi-finals at any of the other three Grand Slams — so it is little surprise that she has embraced being back at Wimbledon 12 months after her rhutless rout of Eugenie Bouchard in the final.

“It’s going to be special,” Kvitova said when asked how she will feel when she walks out on Centre Court for her first round tie against Kiki Bertens on Tuesday.

“My parents are coming as well. They get an invitation. It’s nice to have them here.

“It was a really great journey through the tournament last year. Holding the trophy was great. That’s the best memory.

“I’m really looking forward to stepping out there. The feelings and the nice memories will be stronger than the nerves.”

She has suffered three successive Grand Slam exits before the quarter-finals and decided to take a two-month break after losing her passion for the sport.

I just felt exhausted and tired from everything,” she said.

“It was a really tough decision for me to miss the two big tournaments during March.

“But I feel much better than before. I’m really happy to be back on the court and doing what I love.

“That’s important. I recharged some batteries, for sure.”

The biggest threat to Kvitova’s bid for a third Wimbledon crown will come from world number one Serena Williams, who is seeded to meet her in the final.

The five-time Wimbledon winner is chasing a calendar Grand Slam, but Kvitova defeated Serena in Madrid this year and doesn’t fear the American.

“I never beat her before. So for me that was a good match. I really played well,” Kvitova said.

“I knew what I had to do. That’s the key if I want to beat her. But it’s still a long way before I’m going to meet Serena here.”