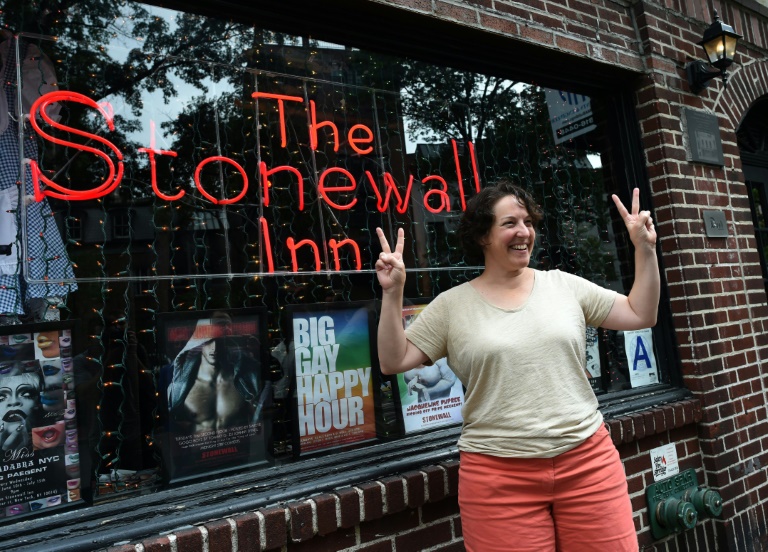 18:08 GMT – As supporters celebrate and opponents plan their next steps, AFP is closing its Live Report on the US Supreme Court’s ruling allowing for same sex marriage in all 50 states.

The ruling, which will go in legal textbooks as Obergefell v. Hodges, began with the question of whether a man, married in another state, could demand he be listed on his late husband’s death certificate in Ohio. Despite scathing dissents, including from Chief Justice John Roberts, a majority of the justices said yes.

Weddings are being celebrated in courthouses from coast to coast and rallies are planned in cities large and small as the historic ramifications of the ruling become clear.

Religious conservatives, including several of the Republican candidates for president, are decrying the ruling as an affront to their beliefs, but as of today, gay marriage is the law of the land.

17:57 GMT – Weddings – Twitter is awash with pictures of same sex couples getting married around the country on very short notice, including 82-year-old George Harris and 85-year-old Jack Evans, who wept as they became the first to do so in Dallas, Texas.

The organization decisionday.org has been counting down the days until the Supreme Court would rule. The rallies were long planned, but it was unclear if they would be celebrations or not.

“Today is a joyous day for all Americans — one that we have awaited for far too long,” he said.

16:50 GMT – Pride – The ruling arrives just before the annual Pride parade in New York and a crowd gathers outside the Stonewall Inn in the West Village.

Just this week, the famous gay bar was granted landmark status, 46 years after after riots broke out there when police raided. At the time, gay sex was illegal in New York.

16:17 GMT – Hillary – The campaign of presidential front-runner Hillary Clinton tweets out her joy at the ruling with the simple statement, “Proud.”

She then put out a map marking the “states where marriage equality is law” that shows the entire US.

“Proud to celebrate a historic victory for marriage equalityâ€”& the courage & determination of LGBT Americans who made it possible. -H

15:51 GMT – Licenses – Several of the states in which gay marriage had been banned reportedly start issuing marriage licenses to same sex couples. It was unclear, however, whether the State of Texas would follow suit.

That state’s conservative attorney general, Ken Paxton, issued a statement that his office would be fighting the ruling on the basis of religious liberty.

“Shortly, my office will be addressing questions about the religious liberties of clerks of court and justices of the peace.

â€œDisplays of hate and intolerance against people of faith should be denounced by all people of good will and spark concern among anyone who believes in religious liberty and freedom for all.

â€œDespite this decision, I still have faith in America and the American people. We must be vigilant about our freedom and must use the democratic process to make sure America lives up to its promise as a land of freedom, religious tolerance and hope.â€

15:37 GMT – Fighting back – Former Arkansas governor Mike Huckabee is one of the first Republican candidates to denounce the ruling.

“The Supreme Court has spoken with a very divided voice on something only the Supreme Being can do — redefine marriage. I will not acquiesce to an imperial court any more than our Founders acquiesced to an imperial British monarch. We must resist and reject judicial tyranny, not retreat.

“This ruling is not about marriage equality, it’s about marriage redefinition. This irrational, unconstitutional rejection of the expressed will of the people in over 30 states will prove to be one of the court’s most disastrous decisions, and they have had many. The only outcome worse than this flawed, failed decision would be for the president and Congress, two co-equal branches of government, to surrender in the face of this out-of-control act of unconstitutional, judicial tyranny.”

He went on to ask for contributions to his campaign from those who support “traditional marriage.”

“Progress on this journey often comes in small increments. Sometimes two steps forward, one step back, propelled by the persistent effort of dedicated citizens. And then sometimes there are days like this when that slow, steady effort is rewarded with justice that arrives like a thunderbolt.

“This morning the Supreme Court recognized that the Constitution guarantees marriage equality. In doing so, they’ve reaffirmed that all Americans are entitled to the equal protection of the law, that all people should be treated equally regardless of who they are or who they love.

15:14 GMT – Opponents – Of course, not everyone is pleased with the ruling.

Chief Justice John Roberts read his sharply worded dissent from the bench, the first time he has done so. And statements against the move have flooded in. The Republican party, which is officially opposed to gay marriage, said it ignored states’ rights.

â€œEven though the Supreme Court has spoken with finality, there remains a diversity of opinions about marriage policyâ€”from those celebrating today’s ruling to those concerned about the Constitutional balance of power.

â€œAs a party, we believe in the importance of traditional marriage between a man and a woman and remain committed to finding common ground to champion the family’s role in society. Marriage is critically important to strengthening our country and our communities. Likewise, we will remain champions of religious liberty. Today’s ruling cannot and must not be used to coerce a church or religious institution into performing marriages that their faith does not recognize. We should respect the sincerely held religious views of our fellow citizens, just as we respect those on the winning side of this case.â€

15:09 GMT – Lasting change – The president can be heard praising Obergefell’s commitment to equality.

“Well, we’re really proud of you,” he says. “And you know, just know that, not only have you been a great example for people but you’re also going to bring about a lasting change in this country. And it’s pretty rare where that happens. So I couldn’t be prouder of you and your husband. God bless you,” he says.

“Thank you, sir, that means an incredible amount to me,” Obergefell responds.

14:59 GMT – Momento – Jim Obergefell, who was one of the lead plantiffs in this case, held a small picture of his late husband as a momento as he spoke to reporters on courthouse steps.

“My late husband John and I were together for almost 21 years before he passed away as a result of the complications of ALS… And when the man I loved and cared for passed away from one of the cruelest diseases known to humanity, the state of Ohio, the state in which I’ve lived, worked and paid taxes for most of my life, continued to fight my right to list my name on John’s death certificate.

“Today’s ruling from the Supreme Court affirms what millions across this country already know to be true in our hearts. Our love is equal. That equal justice under law apply to us, too.”

14:51 GMT – Kennedy – Justice Anthony Kennedy, who has been a strong voice for gay rights, wrote the majority opinion. He closed with a moving passage on the importance of the union of marriage as an institution.

“No union is more profound than marriage, for it embodies the highest ideals of love, fidelity, devotion, sacrifice, and family. In forming a marital union, two people become something greater than once they were. As some of the petitioners in these cases demonstrate, marriage embodies a love that may endure even past death. It would misunderstand these men and women to say they disrespect the idea of marriage. Their plea is that they do respect it, respect it so deeply that they seek to find its fulfillment for themselves. Their hope is not to be condemned to live in loneliness, excluded from one of civilizationâ€™s oldest institutions. They ask for equal dignity in the eyes of the law. The Constitution grants them that right. The judgment of the Court of Appeals for the Sixth Circuit is reversed.

“It is so ordered.

When he first ran for president, Obama said he did not favor same sex marriage, but later said his position on the issue had “evolved.” Before his formal statement, he tweeted out his support.

“Today is a big step in our march toward equality. Gay and lesbian couples now have the right to marry, just like anyone else. “

14:38 GMT – Celebrations – Supporters of gay marriage sing the national athem on the steps of the Supreme Court, which are always closed to the public, as they wave US and rainbow flags, weep and cheer the ruling.

14:31 GMT – WELCOME to AFP’s Live Report on the US Supreme Court’s historic ruling that same sex marriages are legal across all 50 states.

In a tight 5-4 ruling, the court declared that states must issue marriage licenses to gay couples, making any state bans of the practice invalid. States must also recognize marriages celebrated in any other state.