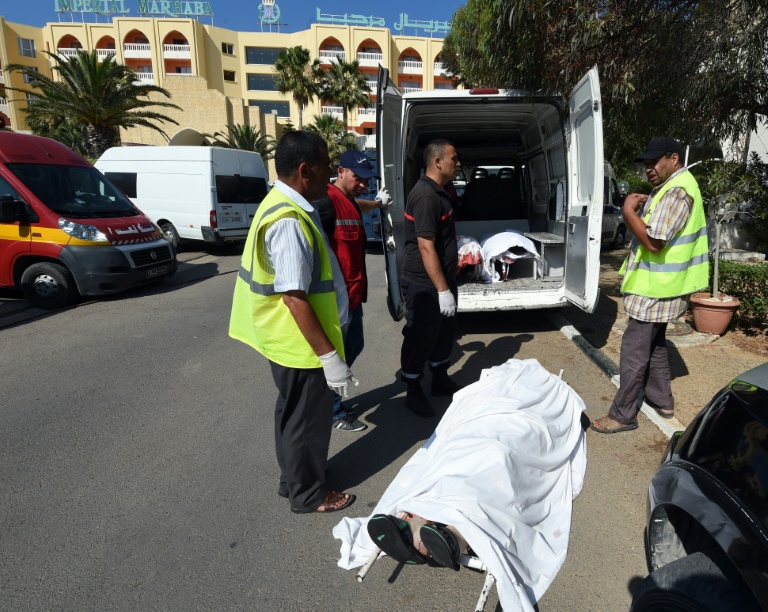 A man pulled a gun hidden inside a beach umbrella and opened fire at a packed holiday resort Friday, massacring 39 people in Tunisia’s worst attack in recent history.

The carnage at the popular Mediterranean resort of Port el Kantaoui came the same day a suicide bomber killed 27 people at a Shiite mosque in Kuwait and a suspected Islamist attacked a factory in France.

There was no immediate claim of responsibility for the Tunisia attack, but the Islamic State group, which Monday marks the first anniversary of its “caliphate” straddling Iraq and Syria, said it bombed the Kuwait mosque.

Witnesses described scenes of panic after the shooting at the five-star Riu Imperial Marhaba Hotel on the outskirts of Sousse, about 140 kilometres (87 miles) south of Tunis.

British Foreign Secretary Philip Hammond said in London five Britons had been killed and warned that the toll could rise.

“Because of the nature of the composition of the tourist population in this part of Tunisia we have to assume that a high proportion of those killed and injured will have been British,” he said.

A spokesman for Spain’s RIU group said most of the 565 hotel guests were from Britain and “central European countries”.

In Dublin, Foreign Minister Charles Flanagan said an Irish woman was among the dead.

Secretary of State for Security Rafik Chelly told Mosaique FM the gunman was a Tunisian student previously unknown to the authorities.

“He entered by the beach, dressed like someone who was going to swim, and he had a beach umbrella with his gun in it. Then when he came to the beach he used his weapon,” Chelly said.

“All I saw was a gun and an umbrella being dropped,” she told ITV television.

“Then he started firing to the right hand side of us. If he had fired to the left I don’t know what would have happened, but we were very lucky.”

The shooting was the worst in modern-day Tunisia and followed a March attack claimed by IS on Tunis’s Bardo National Museum that killed 21 foreign tourists and a policeman.

He said he thought it was “firecrackers going off”.

“Only when you could start hearing bullets whizzing around your ear do you realise it was something a lot more serious than firecrackers.”

“My son was in the sea at the time and of course my wife and myself were shouting for him to get out the sea quick and as we ran up the beach he said: ‘I just saw someone get shot’.”

Briton Olivia Leathley, 24, heard “loud bangs” and when she went to the lobby to find out what was happening, she saw a woman whose husband had “been shot in the stomach in front of her”.

“She got dragged away by hotel reps trying to get her to safety but she was a complete mess. She was in hysterics,” she said.

“All she said was that he’d been shot and that he was there bleeding on the beach and he was just saying, ‘I love you, I love you’, and then his eyes rolled back into his head.”

In Cairo, leading Sunni Muslim institution Al-Azhar called the “heinous” shooting a “violation of all religious and humanitarian norms”.

Tunisia, birthplace of the Arab Spring, has seen a surge in radical Islam since veteran president Zine El Abidine Ben Ali was ousted in the 2011 revolution.

Dozens of members of the security forces have been killed in jihadist attacks since then.

In October 2013, a suicide bomber blew himself up in a botched attack on a Sousse beach while security forces foiled another planned attack nearby.

Even before the latest attack, Tunisia’s tourism industry had been bracing for a heavy blow from the Bardo shooting, but was determined to attract tourists with new security measures and advertising.

Tourism Minister Salma Rekik announced a raft of measures to bolster security in tourist areas and roads leading to them, and to tighten airport controls.

The tourism sector, which accounts for seven percent of Tunisia’s GDP and almost 400,000 direct and indirect jobs, had already been rattled by political instability and rising Islamist violence.