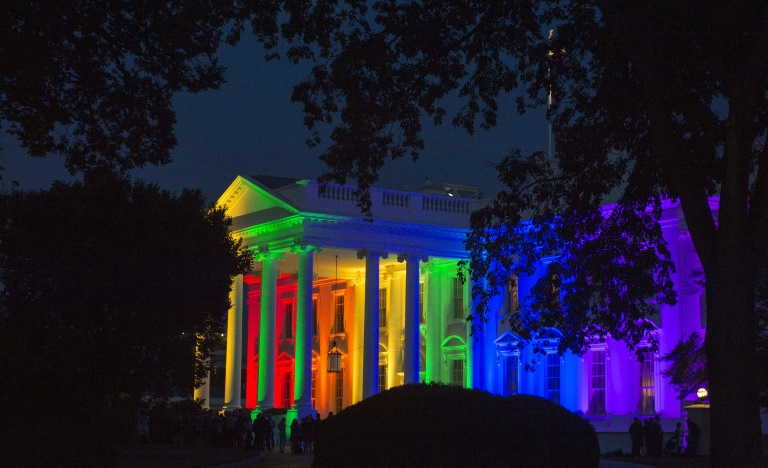 The US Supreme Court made same-sex marriage legal throughout the nation in a much-awaited landmark decision that triggered wild jubilation and tears of joy across the country.

In a 5-4 ruling on Friday, the highest court in the United States said the Constitution requires all 50 states to carry out and recognize marriages between people of the same sex.

President Barack Obama praised the ruling as “a victory for America.” The court decision marked a fresh coup for the White House, coming a day after the Supreme Court upheld an important and disputed section of Obama’s signature health care reform.

“Today we can say in no uncertain terms that we’ve made our union a little more perfect,” Obama said at the White House, which was later lit up in the rainbow colors of the gay rights movement.

“This decision affirms what millions of Americans already believe in their hearts — when all Americans are treated as equal, we are all more free.”

The Supreme Court ruling made the United States the 21st country or territory in the world that recognizes same-sex marriage as legal.

Prominent in the crowd was Jim Obergefell, the lead plaintiff in the case, clutching a photo of his deceased husband John Arthur.

He took a brief phone call from Obama, who told him: “Not only have you been a great example for people but you’re also going to bring about a lasting change in this country.

“And it’s pretty rare where that happens, so I couldn’t be prouder of you and your husband. God bless you.”

Obergefell, who was live on television at the time, replied humbly: “Thank you, sir. That means an incredible amount to me.”

Also in the vast crowd outside court as the life-changing news filtered through were Robert Westover, 51, and Tom Fulton, 57, who hugged and kissed.

“It feels like my birthday, the prom, our wedding day. It’s hard to express the intensity of this moment, that our love now is equal,” Westover told AFP.

The decision was applauded across the country, with Hollywood celebrities such as Katy Perry and Ben Affleck offering praise, while in New York revelers waved rainbow flags and gathered at a famed gay bar to celebrate.

The case was brought by 14 same-sex couples, and the widowers of two gay couples, including Obergefell, who had challenged de facto bans on same-sex marriage in Michigan, Kentucky, Ohio and Tennessee.

All four states had insisted in their respective constitutions that marriage could only be a union between a man and a woman.

Marriage has been a core institution in society since ancient times, “but it has not stood in isolation from developments in law and society,” reasoned Justice Anthony Kennedy, who delivered the ruling.

To exclude them from marriage, Kennedy said, would deny same-sex couples “the constellation of benefits that the states have linked to marriage.”

Voicing dissent was Chief Justice John Roberts, who expressed concern that the court was making a decision better left to elected state legislatures.

“If you are among the many Americans — of whatever sexual orientation — who favor expanding same-sex marriage, by all means celebrate today’s decision,” he said.

“But do not celebrate the Constitution. It had nothing to do with it.”

The decision came two years to the day after the Supreme Court, in another major ruling, struck down a controversial federal law that denied US government benefits to wedded gays and lesbians.

While some praised the ruling, others were eager to voice disapproval.

“Nature and nature’s God, hailed by the signers of our Declaration of Independence as the very source of law, cannot be usurped by the edict of a court, even the United States Supreme Court,” it said.

“No court, no law, no rule and no words will change the simple truth that marriage is the union of one man and one woman,” he said in a statement.

The US Conference of Catholic Bishops, which champions the Vatican’s opposition to marriage equality, called Friday’s outcome “a tragic error.”

“Jesus Christ, with great love, taught unambiguously that from the beginning marriage is the lifelong union of one man and one woman,” it said.