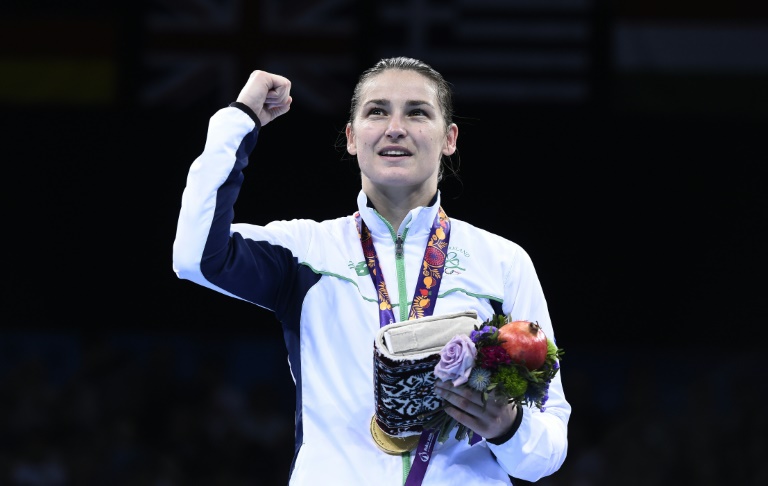 Irish boxing superstar Katie Taylor won yet another major title at the European Games on Saturday but even that wouldn’t bring her to say she had replaced idol Sonia O’Sullivan as her country’s greatest ever female sportswoman.

Her victory in Baku was cheered to the rafters by a sizeable group of supporters — who had more reason to celebrate later as Michael O’Reilly won the middleweight title — and the Irish European Olympic Committees (EOC) president Pat Hickey earned an embrace from a grinning Azerbaijan president Ilham Aliyev in the stands.

However, despite adding another medal to her overflowing trophy cabinet, Taylor didn’t let her trademark modesty slip when asked if she believed she had surpassed O’Sullivan as Ireland’s greatest athlete.

O’Sullivan won the world outdoor silver medal over 5000 metres in 1995, won silver at the 2000 Olympics in the same event and was also crowned European champion three times, including the 5000 and 10000 metres double at the 1998 championships.

“I’m not sure I can go that far,” said Taylor, who has suffered just seven defeats in 167 bouts over the 10 years she has been in the sport.

“Sonia O’Sullivan has always been my idol. I don’t know if I can take her mantle yet. For me she remains the greatest Irish female athlete.”

Taylor, who delivered on her promise to perform better than Irish duo Jedward did in the same Crystal Hall at the Eurovision Song Contest in 2012, similarly didn’t wish to claim she is the greatest pound for pound fighter in women’s boxing.

“I think it’s great to be in the mix and mentioned in that conversation but it’s very opinionated as well,” said Taylor.

“I’m not going downhill. I’m going to improve in every competition.

“When you’re so consistent people have to stand up and take notice. It’s great to have that support back home as well. I don’t think people praise consistency enough and it’s great to get that praise.”

Taylor — an all-round sportswoman who has represented Ireland in football and is also a superb Gaelic Footballer — admitted the week had been a tough one for her as she came close to defeat in Friday’s semi-final.

“It’s a bit of a relief to sit here with the gold medal. I felt a lot of pressure this week as always,” said Taylor, who regardless of her unrivalled status has to still qualify for the Olympics in Rio de Janeiro next year through next February’s world championships in Kazakhstan.

“Now I’ve got every single major title out there and it’s great to add this one to the list.

“Onwards and upwards, the best is yet to come. I’m going to go from strength to strength.

“People at home think I just stroll through these competitions but every fight is hard fought and hard won.”