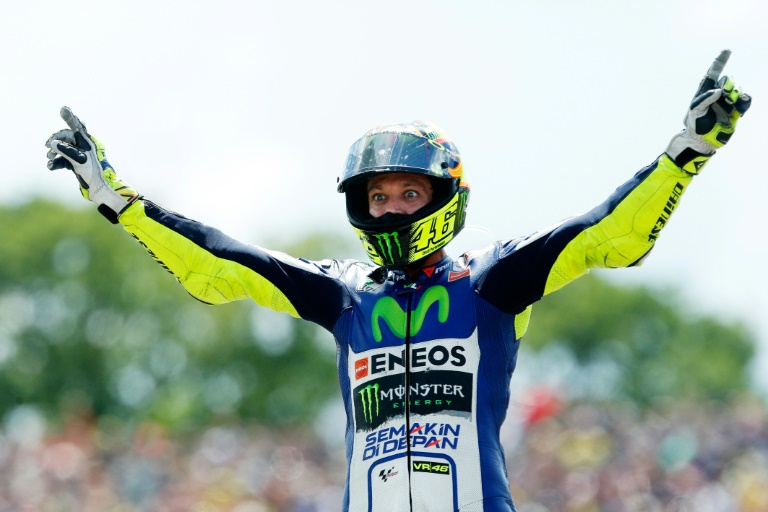 Valentino Rossi strengthened his world championship lead on Saturday by coming out on top in a thrilling battle with Marc Marquez to win the Dutch MotoGP at Assen.

The Italian, on his Yamaha, started from pole and led almost all the way, although reigning world champion Marquez did briefly overtake him seven laps from the end.

Rossi quickly regained the lead and then held off one last desperate push on the final chicane by the Spaniard, on a Honda, cutting the corner to go on and claim his third win of the season and the 111th victory of his illustrious career.

“This win is very important because I was competitive all weekend,” said Rossi, whose final winning margin was 1.242 seconds.

“I started from pole and pushed throughout the race. The pace was very strong but Marquez came with me. I tried to play all my cards and did the two last laps very strong.”

For Rossi it was a seventh MotoGP win on the famous Assen track, one more than the six victories recorded by his legendary Italian compatriot Giacomo Agostini.

He has now won nine times in all categories at the only circuit to stage a leg of the world championship every year since its inception in 1949.

As he chases a first world championship title since 2009, Rossi stretched his advantage over nearest rival Jorge Lorenzo to 10 points.

“It is important to take maximum points in a weekend like this when you feel confident, because the championship is long,” Rossi added.

Meanwhile, having struggled recently for form, Marquez was happy to come so close to a victory and to claim a place on the podium.

“We came back fighting for the win which is the most important,” he said.

“The whole race I focused on studying the last chicane perfectly, I knew where to put the bike to limit his space but I didn’t think he’d cut the corner.

“In the end I feel we won the race, but five points don’t really matter for me.”

Spaniard Lorenzo, also on a Yamaha, had won the last four races, including in Catalonia a fortnight ago.

He finished third this time, but could be pleased with his day having started from eighth on the grid.

“It is a very good result knowing the situation was difficult, starting from eighth place,” Lorenzo said.

“I didn’t have the pace of Valentino and Marc so I realised I had to try not to lose this third place which is very important for the championship.”

Italy’s Andrea Iannone finished fourth on a Ducati to remain in third place in the overall standings, while Pol Espargaro of Spain was fifth on the day.

The ninth race of the season will be at Sachsenring in Germany in two weeks’ time.

Earlier, Johann Zarco of France, on a Kalex, won the Moto2 race from pole position.

It was his third win of the season and his second in a row after his success in Catalonia two weeks ago.

He finished ahead of Kalex team-mate Tito Rabat of Spain and Britain’s Sam Lowes of Speed Up.

The trio went into the race holding the leading three places in the world championship standings, which remain unaltered.

Miguel Oliveira of Portugal, riding a KTM, stormed to the second Moto3 victory of his career, coming home ahead of Fabio Quartararo of France, on a Honda.

Britain’s Honda rider Danny Kent, who has won four of the season’s eight races, was third and maintains his lead in the world championship standings.