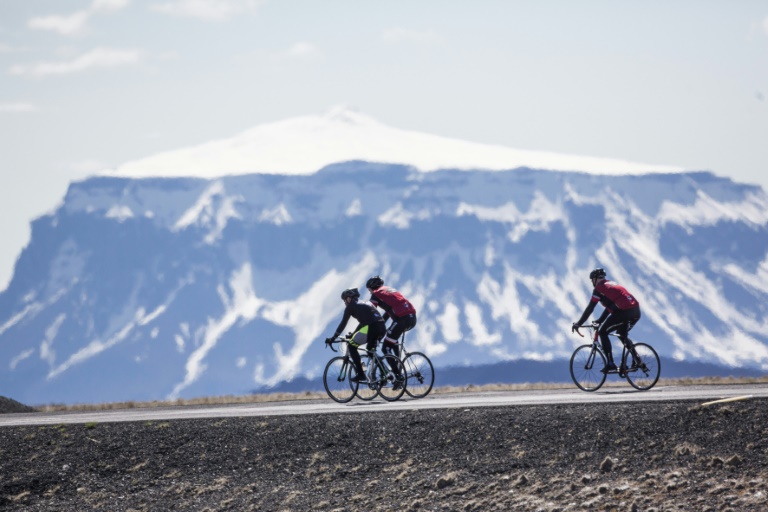 “This was just about as difficult as I had expected,” says the 37-year-old Icelander, his muscles aching and on the verge of collapse.

“The first thing I will do now is go home, get some sleep and have a good meal.”

Sigurdarson and his team-mates have just finished the WOW Cyclothon, an annual race on Iceland’s Route 1, the main ring road around the volcanic North Atlantic island.

Riders start in the capital Reykjavik and finish in Hafnarfjordur, just south of the start, covering flat and mountainous terrain.

The backdrop for the race is awe-inspiring: pristine snow-capped mountains, flat lava fields and green summer meadows, deep fjords punctuating the long treeless coastline, and erupting geysers, all set against a sun that never sets this time of year.

Some 1,160 riders took part in this year’s race, featuring competitors from at least 11 countries, including Britain, Canada, France, Germany, Russia, Spain, Switzerland and the United States.

In the solo competition, riders had up to 84 hours to complete the circuit, while the relay teams — men’s, women’s, and mixed — had 72 hours.

The solo competition “must be some sort of masochism I can’t understand”, smiles Benedikt Ingi Tomasson, one of the race organisers.

In the relay, cyclists take turns on their bikes, sleeping and eating in their team’s support car when it’s not their turn to ride.

Every inch of the support cars are laden with supplies, food stocks, back-up bikes and spare parts.

Along some sections of the circuit, long caravans of cyclists and vans wind their way along the route, while in others, lone cyclists accompanied by a single support car pedal away in serene solitude.

“We are a 10-man team and we cycled for about 10 to 15 minutes each time, five at a time. And then we tried to sleep for an hour every five or six hours,” Sigurdarson explains.

“That’s what in the end turned out to be most difficult, we got very tired. Very few really sleep, you lie down and try to relax and get some nourishment.”

Laurent Sester, leader of Swiss team Spirit of Biel-Bienne, says halfway through the race his crew were finding it hard to get any sleep because of the bright nights.

“What rest?,” he laughs. “It’s difficult, especially when you come from a country like Switzerland that doesn’t experience the midnight sun.”

Sleeping and eating in cramped quarters in the support cars — some use buses, others campers — were the least of the teams’ problems.

“For our team, a group of friends, the coexistence in such a small space is not a problem. But after just a few hours it transformed into a big mess,” Sester says, grinning.

“The pace seemed to us incredibly high … We did not really expect that,” Sester says.

Sigardurson agrees. “There were four very strong teams and it started with minor attacks very early on. High speed from the start.”

Most riders rode street racing bikes, except on a mountainous section in eastern Iceland where they used carbon-fibre road bikes.

In the small south-eastern village of Djupivogur, a group of about 40 riders take a short break, invited into the home of 68-year-old Gudny Ingimundardottir for a comforting bowl of steaming fish soup.

“The people are cycling and they’re hungry,” she tells the online edition of daily paper Morgunbladid.

The first relay teams cross the finish line in Hafnarfjordur under bright sunny skies after 36 hours on the road.

Champagne corks pop and riders hug each other, happy — and relieved — to have completed the excruciating event.