Redemption for Tevez as Argentina down Colombia in Copa America | Newsmobile
Tuesday, August 9, 2022 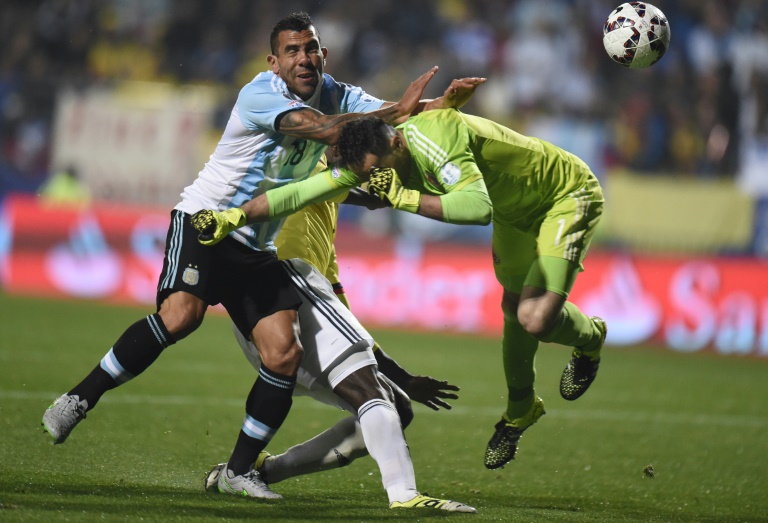 Carlos Tevez fired Argentina into the semi-finals of the Copa America here Friday, scoring the decisive spot-kick as the tournament favourites defeated Colombia 5-4 in a penalty shoot-out.

Tevez, who missed the crucial penalty when Argentina went out in a shoot-out at the 2011 tournament, rammed homed the winning spot-kick after Colombia’s Jeison Murillo had blazed over the bar.

The 31-year-old, who came on as a second half substitute, provided the dramatic final twist to a shoot-out which saw Lucas Biglia and Marcos Rojo both miss kicks for Argentina that would have sealed victory after regulation time finished locked at 0-0.

Argentina’s win puts them into a semi-final against the winner of Saturday’s quarter-final between Brazil and Paraguay.

Tevez admitted his contribution to victory — four years after his nightmare miss sealed Argentina’s elimination from the 2011 tournament on home soil — was sweet.

“But tonight is not about me, it’s about my team-mates. My team-mates won this match and I’m very proud of them, and I’m proud to be part of this squad.”

Tevez, who spent three long years frozen out of Argentina’s national team before returning after the 2014 World Cup, said he was happy with his non-starting role in the Albiceleste.

“I enjoy playing, the team is playing well and I just have to wait for my chance,” Tevez said.

Argentina coach Gerardo Martino admitted that he had deliberately omitted Tevez from his list of five designated penalty takers for the shoot-out in order to ease pressure on the former Manchester City striker.

“I didn’t put Tevez among the top five because the last time he shot, Argentina went out. We wanted to avoid that,” Martino revealed.

Defeat was cruel on Colombia goalkeeper David Ospina, who had single-handedly kept his side in the contest with a series of superb saves during 90 minutes to frustrate the tournament favourites.

Argentina had earlier dominated a one-sided first half which at times threatened to spiral out of control with both sides committing a series of niggly fouls that went unpunished by Mexican referee Roberto Garcia.

Argentina midfielder Javier Pastore was the first to threaten, touching on a low cross from Angel Di Maria that was cleared at the near post by the Colombian cover after only seven minutes.

Colombia star James Rodriguez became the first of six players to receive a caution in the opening 45 minutes when he was booked for dissent.

For Argentina, both Javier Mascherano and Sergio Aguero were booked.

The highlight of the half was an incredible double save by Ospina in the 26th minute.

Ospina, whose future at Arsenal is now uncertain following the club’s signing of Petr Cech this week, reminded Gunners manager Arsene Wenger of his ability to thwart Aguero and Messi in quick succession.

A low cross from the right from Pastore picked out Aguero whose shot was saved by Ospina’s legs.

Messi seemed certain to score from the rebound as the ball looped into his path but Ospina somehow recovered in time to parry the Argentina captain’s header over the bar.

Ospina saved Colombia again with another remarkable diving save to tip Nicolas Otamendi’s shot onto the post in the 80th minute.

But Ospina was unable to reproduce his heroics in the shoot-out as Messi, Ezequiel Garay, Ever Banega, Ezequiel Lavezzi all drilled in their first four penalties.

Luis Muriel’s miss for Colombia gave Biglia the chance to clinch it but the Lazio defender shot wide.

The next three penalties were all missed, leaving Tevez to rifle in the winner.