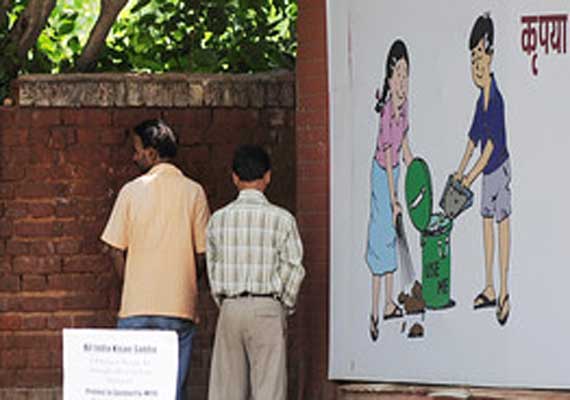 New Delhi: There have been many-a-time when we have seen men peeing to glory on walls and we have often had to look away, covering our noses and mouths with our laundry-fresh handkerchiefs. How many times have been asked to steer clear of the walls near the pavements, presumably because someone has marked their trails there?

While most of us prefer attending the call of nature in private, there are many people who take a fancy to the public walls. Perhaps that is their comfort zone. But, if the Swachh Bharat campaign kicks in, walls will become bars and those enjoying spaying in public will soon be behind it!

In a first of its kind move, a leading publication reported that Â the Government Railway Police of the Agra division Â has pushed 109 people behind bars for peeing in public!

These people were found relieving themselves 24 on the railway property, including platform, tracks parking lot and were jailed for 24 hours, and were only let off when they shelled out Rs 100 to Rs 500 as fines.

Peeing in public is a nuisance. Not just does it pierce the air with its stench that lingers around for hours, it also breeds germs and makes us prone to illness, especially if there are roadside eateries around. To add to it, who likes to see a full grown man doing his business on a street?

In fact, there have been many times when irresponsible parents give in to their childrenâ€™s urge and convert any damn spot on the street into a makeshift toilet for them. Iâ€™ve often come across parents and have given them a long cold stare, after which they either avoid eye contact or pass that sheepish smile.

To such people: will you just urinate anywhere in your home?Â  No, right. Then why on the streets? Come on, be a little civilised. No? Then join the 109 who got jailed.