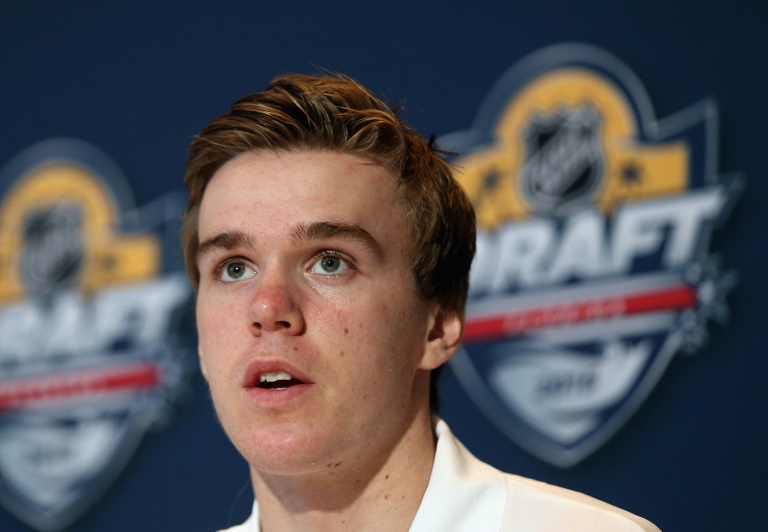 Connor McDavid, who led Canada to a gold medal at the 2015 World Junior Championships, was chosen first overall by the Edmonton Oilers during the National Hockey League’s annual entry draft.

The 18-year-old phenom was the consensus first overall pick after an outstanding season with the Erie Otters of the Ontario Hockey League in which he led his junior team to the league playoff finals where they lost to Oshawa.

McDavid led the Otters in postseason scoring with 49 points in just 20 games and was named player of the year in all of Canadian junior hockey. He also won the Red Tilson Award as the OHL’s top player and the Wayne Gretzky Award as the top playoff performer.

“This is a surreal feeling,” said Canadian McDavid, who is expected to join Gretzky’s former Oilers’ team next season. “The Edmonton Oilers have such a huge history. It is hard to put into words how I feel right now.”

The Buffalo Sabres took American forward Jack Eichel with the second pick and the Arizona Coyotes made Canadian center Dylan Strome the third choice. Mitchel Marner went fourth to the Toronto Maple Leafs while Noah Hanifin rounded out the top five by becoming the first defenseman taken in the draft by the Carolina Hurricanes.

McDavid capped his third season in the Canadian major junior hockey by finishing second in scoring for the Otters in the regular season with 44 goals and 120 points.

McDavid moves on to the next phase of his career having collected 285 points in 163 games.

Buffalo did the expected and took Boston University center Eichel with the second pick. The 18-year-old Eichel won the Hobey Baker Award as the top player in US college hockey.

Eichel led the Terriers with 71 points.

“I’m just so excited. I’m honored to be part of the organization. It’s a dream come true,” Eichel said. “I think everybody in Buffalo wants success and wants it soon.”

The Massachusetts native helped Boston reach the national championship game where they lost 4-3 to Providence College. Eichel had six shots on goal but finished with just one assist and a penalty in the championship game.

With the third-overall selection, the Arizona brought in McDavid’s teammate, left-handed shooting center Strome. Strome led the Otters in all offensive categories and was the OHL scoring champion, totalling 45 goals, 84 assists and 129 points over 68 regular-season games. He added 22 points in 20 playoff contests.

The Maple Leafs used the fourth spot to grab Marner, a center from the OHL’s London Knights. Marner totalled 126 points — second only to Strome — in 63 regular-season contests, then picked up nine goals and seven assists in only seven playoff games.