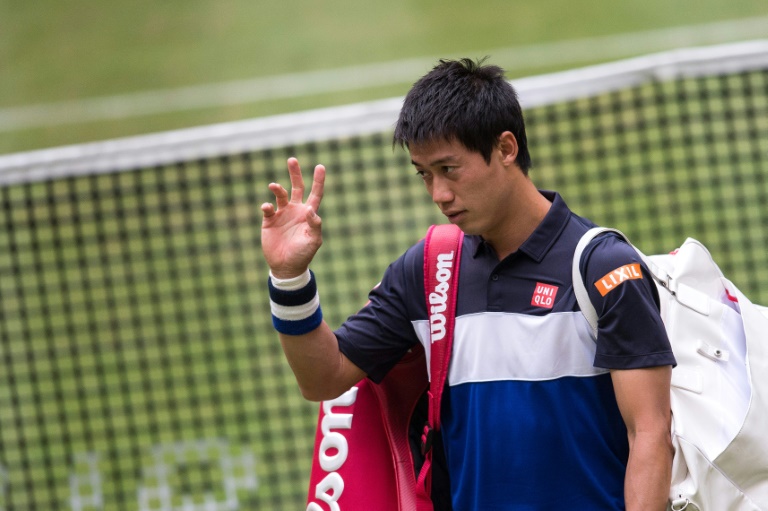 Japan’s Kei Nishikori insists he is fit to launch his Wimbledon challenge after the world number five suffered a calf injury scare.

Nishikori is due to face Italy’s Simone Bolelli in the first round of the grasscourt Grand Slam, which gets underway on Monday.

But the 25-year-old’s participation in the tournament was thrown into doubt last week when he was forced to retire from his semi-final against Andreas Seppi at the Wimbledon warm-up event in Halle.

Nishikori had first sustained the problem in his left calf when he faced Jerzy Janowicz in the last eight and he aggravated it further in the Seppi clash.

Speaking to reporters at the All England Club on Saturday, Nishikori was adamant he had recovered from the injury and he expects to be at full strength in his opener against Bolelli.

“It’s good. I should be fine for Monday, he said.

“I had a good three matches in Halle. I think it’s great preparation for here.

“I’m sure that I’ll have a lot of confidence. I’m feeling good on grass.”

Florida-based Nishikori’s fifth seeding makes him the highest-seeded Japanese player at Wimbledon in the Open era.

He surpasses the mark of Kimiko Date-Krumm, who was the sixth seed at the All England Club in 1994 and 1995.

Yet Nishikori has never been past the fourth round in six visits to Wimbledon, while he has made at least the quarter-finals of the other three Grand Slams.

He finished as US Open runner-up in 2014 and made last eight appearances at the Australian and French Opens this year.

And Nishikori hopes to emulate those fine performances over the next fortnight and possibly even win the tournament.

“I will try, yeah,” he said when asked about his chances of taking the title from defending champion Novak Djokovic.

“I think I’m getting close. I’m not winning a lot of titles yet, but I beat Novak and Roger (Federer) a couple of times.

“The next goal is to win a Masters or a Grand Slam. I hope I can have a good season and get closer to the top guys.”

Although Nishikori is confident of going further than the last 16 this year, he knows he faces a tricky first round tie against world number 56 Bolelli, who the Japanese star narrowly beat in five sets in their only previous meeting last year in the last 32 at Wimbledon.

“But I’m feeling good. I will focus on the first match and play a good match.

“The first round, it’s never easy. I’m going to have to fight through.”

As the Japanese number one and a top-10 ranked player, Nishikori is the standard bearer for Asian tennis.

That can bring its own suffocating pressures, but Nishikori says living in the United States helps him avoid the glare of the Asian media spotlight.

“Actually I don’t feel any pressure from Japan because I live in the States,” Nishikori said.

“I try not to think too much about outside things. I feel my own pressure (to win) sometimes but I’m handling it really well.”