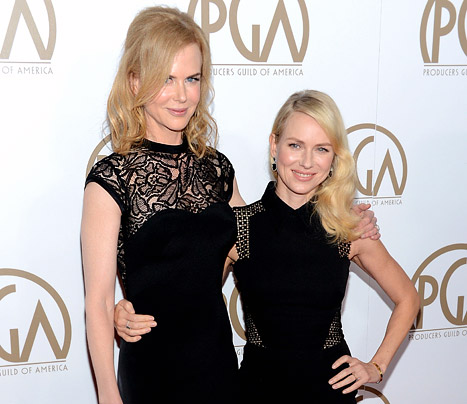 At the Women in Films Crystal and Lucy Awards, Nicole Kidman kissed good friend Naomi Watts to undo a regret she had about her career.

Kidman, whoÂ bagged the Crystal Award for Excellence in Film, revealed that when she was 14, Jane Campion had offered her a role in a film that required her to wear a shower cap and kiss a girl.

The actor admitted she snubbed the role becauseÂ of this.

At the event,Â Kidman said she’s no longer afraid to attempt the unexpected, urging women to “take risks, raise our voices and honour the fire within.”Â

The Oscar winner also pulled a shower cap from her purse and declared she was “ready… to kiss any woman in the room.” Long-time friend Naomi Watts, who presented Kidman with her award, took her up on the offer.Â

In a series of photographs that have hit the internet, Kidman, 47, can be seen grabbing 46-year-old Watt’s face as she leaned in to kiss her, reported Us magazine. They then went on to do a great Madonna-Britney Spears’ kiss impersonation.

The friendly gesture led to cheering by the crowd as Watts and Kidman smiled at each other.