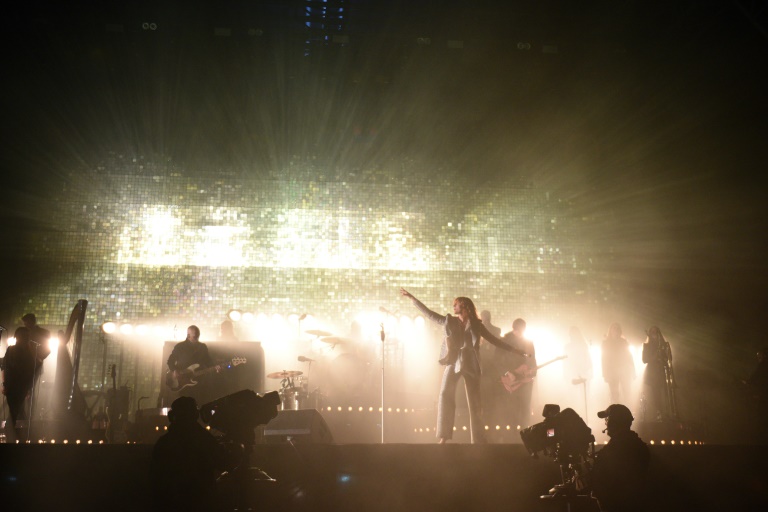 Glastonbury may be best known for its music, but many of the 175,000 people gathered at Worthy Farm come for the spiritual, political and family events that this year include Pussy Riot and the Dalai Lama among the performers.

British band Florence and the Machine kicked off three days of major acts with a headline performance on the main Pyramid Stage on Friday, stepping in for the Foo Fighters who cancelled after frontman Dave Grohl broke his leg.

But many of those who have been camping in this scenic corner of Somerset, southwest England, since Wednesday were by then already settled into the five-day festival that offers much more than simply music.

Nathan Wason, a guitarist due to play on Saturday with British folk singer Ben Howard, brought along his wife, three-year-old daughter Esme — already a Glastonbury veteran — and ten-month-old son Bobby.

“It’s a good experience for them,” he said of bringing his children, saying they “adapt very well” — as long as they get some sleep. “It’s a bit hard when they get tired.”

But it has retained its original friendly vibe where ageing hippies, children and party animals rub along happily together, all wearing the now mandatory wellies.

Rain seems almost inevitable at Glastonbury, with this year’s festival-goers suffering their first deluge on Friday, which quickly turned parts of the 900-acre (four square kilometre) site into a sea of mud.

Glastonbury resembles a quirky village, complete with stands selling food from all over the world, pop-up tattoo and hair salons, and fire eaters.

In the Kidz Field, an area dedicated to children, world-famous astrophysicist Stephen Hawking was due to speak on Friday but failed to appear.

There were rumours he was ill, but festival organisers could not confirm this, and pointed out that no date or time had been set for his appearance.

“My kids are looking forward to seeing Dynamo,” a magician known for his incredible levitation tricks, said Karen Chislett, walking around with 10-year-old Freya and six-year-old Caian.

In another part of the site, Russian punk protest band Pussy Riot tied up an actor dressed up as a pro-Russian separatist fighter in Ukraine, covering his head with a rainbow mask to denounce the conflict in that country and the lack of respect for gay rights in Russia.

Sitting on top of a Russian military vehicle, members Nadezhda Tolokonnikova and Maria Alyokhina laid out their rules on life to an assembled crowd, including “think different, think feminist” and “every change starts with a riot”.

– Kanye and the Dalai Lama –

Down on the ground, 58-year-old Susan Gregory was more concerned with keeping the recycling bins under control. Like 25,000 other volunteers here, she is working throughout the festival for her ticket and free meals.

“I don’t think I miss anything by working, I think I would be bored if I was doing nothing,” she said.

She has been to Glastonbury six times before and is here on her own. “We meet up with friends every year, we catch up of what we have been doing over the year. It’s part of the experience, to get away from family,” she said.

Back on stage, indie-pop band The Libertines made a surprise appearance on Friday night ahead of Florence and the Machine, while rapper Kanye West is booked for the prime Saturday night headline slot.

West has been a controversial choice for a festival known for its rock music, and almost 135,000 people to sign a petition to cancel him.

Veteran rock icons The Who are headlining on Sunday, a day that will also see the Dalai Lama address revellers with what his office said would be a message of “compassion, non-violence and oneness of humanity”.