Home World ‘Love has won:’ Rainbow of joy at US gay marriage ruling 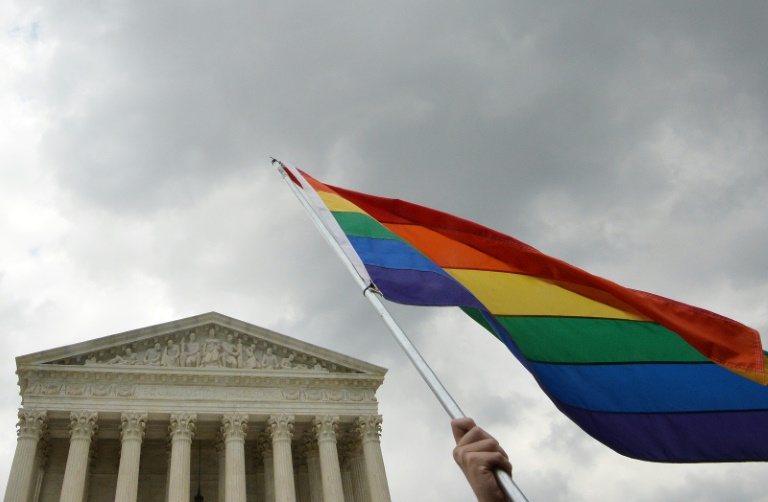 Robert Westover and Tom Fulton have been married for 15 years. But when the US Supreme Court upheld gay marriage nationwide Friday, it was as if they were wed all over again.

“Standing here right now feels surreal,” Westover, 51, told AFP as he embraced his husband under a canopy of fluttering rainbow flags while people chanted “love has won” on the marble steps of America’s highest court.

“It feels like my birthday, the prom, our wedding day!” Westover said, beaming and thrilled at the reality of marriage equality after decades of feeling oppressed by the US legal system.

Several hundred gathered for the justices’ momentous ruling, and when the crowd learned that their hopes had been met, gay and lesbian couples young and old erupted in cheers, tears and song.

“It’s hard to express the intensity of this moment, that our love now is equal,” after years in which the couple, married in West Hollywood when virtually no other district would have legally married them, “could have been arrested simply for loving each other in the privacy of our home.”

With police officers ringing the steps, celebrants posed for pictures outside the court and held up posters expressing support for gay rights — “Jesus had 2 Dads and he turned out fine,” read one.

The Gay Men’s Chorus of Washington performed a moving rendition of the national anthem and the spiritual “We Shall Overcome,” changing the words to “we will marry free today.”

An ecstatic Bonny Harbinger, a 63-year-old federal employee from Maryland, was in the court when the ruling came.

“We couldn’t breathe until we heard the words,” she said.

Aaron and Austin Rhodes were on hand, too. The young brothers from California are budding YouTube stars, and a clip of them coming out to their father has racked up 19 million views.

“I wanted to be here to be part of history so that someday I could tell my kids I was a part of that,” said Aaron. “Me and their dad got married because of this moment.”

Aaron is not married yet, but said “of course” he wants to.

The ruling was particularly poignant for the group of gay Americans who became the plaintiffs in the Supreme Court case of Obergefell v. Hodges.

Jim Obergefell had long pressed his home state of Ohio to list him as the surviving spouse on the death certificate of husband John Arthur, whom he wed in another state that recognized same-sex marriage.

“I love you, this is for you, John,” said Obergefell, holding a photograph of his late husband.

Mary Bonauto could not stop smiling. The lawyer was involved in the early gay rights battles in Vermont and Massachusetts, the first states to legalize same-sex marriage in 2004, and hailed Friday’s “momentous” 5-4 ruling.

“It is also a great thing for kids who no longer have to question why their parents were deemed unworthy of marriage, and those kids can also have the security and protection that marriage provides to families.”

Not everyone was pleased with the court.

“Now we have a legal sin,” said Christine Weick of Michigan, holding a sign that read “God draws a line on gay marriage.”

“I love this country,” Brock added. “There’s a standard, a line that you’re supposed to follow! And you’d be safer in that line than if you wandered all over.”

But opponents were few at the court, and the exultation among the throngs of gay rights supporters went undimmed.

“We’ve been standing on the edge of history for so long, too long, and today we finally took a huge leap toward equality,” said Caroline Dessert, executive director of Immigration Equality, as she held the hand of her lesbian partner Lisa Valenzuela, a middle school teacher.

Valenzuela, 30, offered a succinct description of how she felt on the plaza at the Supreme Court: “pure joy.”